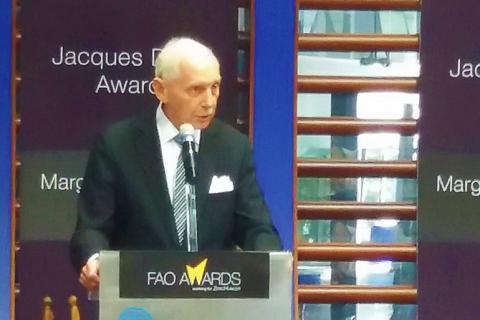 William Lacy Swing, the Director General of IOM, the UN Migration Agency, accepted the Jacques Diouf Award on behalf of the Organization. The Award was jointly granted to IOM and the Rabobank Foundation.

The Jacques Diouf award is presented every two years to individuals or national/regional institutions that have made a significant contribution to the improvement of global food security. Established in 2011, the award pays tribute to former FAO Director-General, Jacques Diouf, recognizing his outstanding leadership, personal engagement, and untiring advocacy in the fight against poverty, hunger and malnutrition. The award consists of an inscribed medal, a scroll describing achievements and a cash prize of USD 25,000.

On receiving the award from José Graziano da Silva, the FAO Director-General, at a special ceremony held at their headquarters, Director General Swing thanked FAO for selecting IOM as joint winner of the Jacques Diouf Award.

“It is a great honour to be recognized with this award. While IOM’s name is the International Organization for Migration, we also see our work as devoted to ensuring that people migrate as a matter of choice rather than by necessity. Much of our work, both under normal circumstances as well as during crises, is spent in trying to enable people not to have to move,” said Director General Swing in his acceptance speech.

He highlighted some examples of the ways in which IOM works to address food insecurity, such as:

“We are grateful that the award also recognizes the work IOM does in advocacy for the rights and protection of migrants at global, regional, national and local levels; and in drawing attention in global debates to the links between migration and development, and circumstances that create or exacerbate vulnerabilities.

“We are privileged already to have an excellent working relationship with FAO. We will have an opportunity to become even closer and even more effective together in the coming year as joint co-chairs of the Global Migration Group in 2018 the year in which states negotiate a global compact for safe, orderly and regular migration. We hope we can help ensure the outcome will be positive for migrants and communities the world over,” concluded Director General Swing.

IOM’s joint recipient, the Rabobank Foundation, is recognized for their unfaltering technical and financial support to rural producer cooperatives and agribusinesses that have outgrown eligibility for donations and microcredit, but are not yet entitled to standard bank loans. By bridging this critical gap, the Foundation has helped boost the self-sufficiency of smallholder farmers and strengthened global food security. The Foundation has also promoted adherence to the Voluntary Guidelines on the Responsible Governance on Tenure of Land, Fisheries and Forests (VGGTs), demonstrating its sustainable approach to food security.