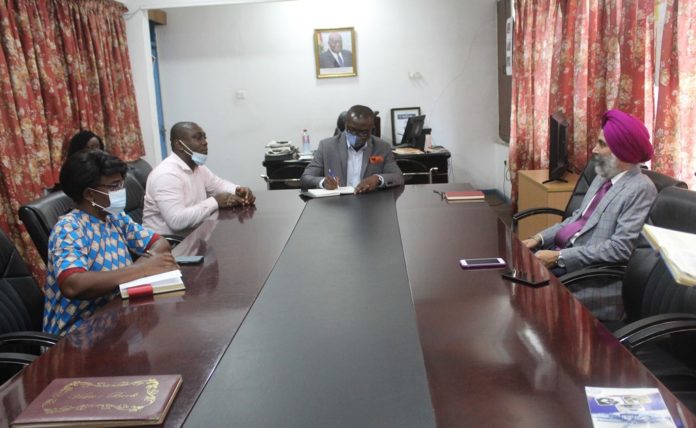 The existing news management system of the Ghana News Agency was built in June 25, 2011 but became outdated in 2017, and had to be shut down due to insufficient funding to upgrade it. The Agency currently does most of its news management operations manually, which affects speed and productivity

Mr Amar made the pledge when he paid a working visit on Tuesday to the Agency to observe the operations of the Agency and its challenges.

Strengthening the Agency would help to promote democracy, sustainable and inclusive governance, prepare a conducive environment for businesses to thrive, and attract investors into the country, Mr Amar said.

He said the Ghana News Agency was such an important national asset, which needed the support of all stakeholders in democratic governance to thrive.

“GNA is a very important media organisation because of its impartiality, credibility, objectivity and accuracy, which are critical for national cohesion, peace, stability, especially as the nation prepares towards a general election,” he said.

Mr Amar said the GNA, being a state owned entity and a pillar of democracy, required a major investment from the government, development partners, private sector and diplomatic missions.

“I now understand what the real challenge is and the important role the Agency plays in the developmental agenda of the country. It is, therefore, important to rally genuine support from everyone, especially the private sector to promote its growth,” he said.

Mr Amar lauded the Agency for its long-term outstanding impartial storytelling, adding that strengthening its operations was good for the progress of the entire country.

Mr Albert Kofi Owusu, General Manager (GM), Ghana News Agency, said the deficit in infrastructure was the agency’s main challenge and commended the IPMC for its zeal to support the Agency in that regard.

He said the Agency was willing to offer students of IPMC internship programmes to improve their skills.

Government, he said, encouraged the private sector to support the Agency, as the national wire service required multiple efforts to be revamped and re-strengthened.

Mr Owusu, therefore, appealed to other private sector and international development partners to support the agency in its transformational agenda.

He said the credibility of the Agency was what had sustained it amid serious challenges, adding that, the nation would be the ultimate loser if the Agency was not with resourced to keep abreast of modern news agency operations.

The GM said the visit of the IPMC was the beginning of a closer relationship between the two entities.

Mrs Beatrice Asamani Savage, Director of Editorial, GNA, said the Agency was committed to the highest journalistic standards towards building a just, united and prosperous nation while telling the Ghanaian and African story to the world.

In recognition of the agency’s importance, it had over the years received support from countries and organisations such as China, India, South Korea, Japan, UNESCO and the European Union and Germany and that the commitment by the IPMC to promote the its cause was in the right direction, she said.