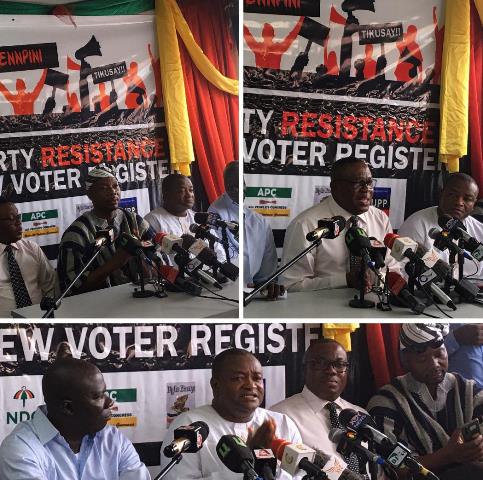 The Inter-Party Resistance Against the New Voters’ Register (IPRAN) is demanding that today’s IPAC meeting with the Eminent Advisory Committee and Civil Society Organizations (CSOs) should be broadcast live.

The group said if the Inter-Party Advisory Committee (IPAC) meeting with the group is aired, it would let the public know the positions of all stakeholders on the compilation of the new Voters’ Register.

The group also insist that a proper public forum should be organized where all parties, and the Pro and Anti New Register Forum will get the opportunity to present their views before the public.

Mr Bernard Mornah, spokesperson of the group announced this at a Press Conference on Wednesday in Accra to further highlight their stance on the compilation of the new Voters’ Register and the engagement meeting with the EC and the Committee of Eminent Advisors.

He said following a meeting with the Resistance last week, the group took a disturbing note of EC’s declaration of April 18 as the beginning of the compilation of the Voters’ Register without recourse to the planned engagement of stakeholders at a meeting scheduled for January 30, 2020.

He described the EC’s action as an act of bad faith purposed to disrespect and disregard its own establishment, the Committee of Eminent Advisors and the CSOs involved in the discussions.

“It is our considered view that, the EC is taking the anger and the will of the people for granted by spiting the good conscience of the Resistance in the invitation of political parties to a meeting with the Committee of Eminent Advisors for further deliberations on the said matter and yet going ahead to announce a date for the commencement of same,” he added.

“We subsequently announce our inability to oblige with the earlier announcement of the momentary suspension of our public manifestations and declare resumption, the series of mass actions earlier outlined. We are by this Press Conference announcing our ‘Yennpini’ march to the EC on Tuesday, February 4 in Accra.”

He said IPRAN members would converge at the Kawukudi Park where they would march through to the EC’s office.

Mr Mornah said during their demonstration in Kumasi, the Chief of Staff received their petition on behalf of Otumfuo Osei Tutu II, the Asantehene and later on presented another petition to Sheikh Osmanu Nuhu Sharubutu, the National Chief Imam and former President Jerry John Rawlings detailing their reasons for the resistance.

He said the group is in communication with the Council of State to present their petition to the National House of Chiefs, the Christian Council and the Ameer of the Ahmadiyya Muslim Mission in Ghana.

The Resistance will also be presenting a petition to the Ghana Journalists Association to explain the issues to their leadership.

He said: “From here, we are moving to the former President John A. Kufuor to present our petition to him and to bring him to page with our stance”.

Mr Samuel Ofosu Ampofo, the National Chairman of the NDC, said the conference formed part of efforts to engage with major stakeholders of which the media is one of them.

He announced that they would be meeting with former President John Dramani Mahama who was currently out of the country, to present him with their petition.

He said the current Voters’ Register is the most updated as the EC recently opened it up for the Limited Registration whereby people including students who attained 18 years and above spent days to write their names.

He said moreover, the Ghana Statistical Service would be embarking on a National Population Census this year and based on the final statistics, then the EC would decide whether it was necessary to compile a new Register.

Mr Ampofo said for a very long time, the IPAC’s work was based on consensus and not by voting, so if the EC thinks it was a done deal and that they would bring in people to vote in favor of their decision, then they will opt out of the discussion.

Mr Hassan Ayariga, the flagbearer of the APC debunked the media assertion that the Resistance wrote to former President Mahama for sponsorship of their activities.

“We vehemently deny that report and our legal team is working to bring the perpetrators of the fabricated stories to book.”

He also denied the allegation that the NDC was the brain behind the Resistance, adding, it is a collective idea from the six political parties.

Mr Ayariga therefore urged the public to join the Resistance to enable them maintain the current Voters’ Register for a credible national elections on December 7, 2020, adding, “this election was very critical to all political parties and stakeholders. We will not allow any new Register to jeopardize the results. This Register elected two Presidents and they all accepted it and it will go ahead to elect another President in 2020.”

He said the only reason why the EC wants full control of the Management System was to manipulate the results and not because the Register was over bloated or obsolete.