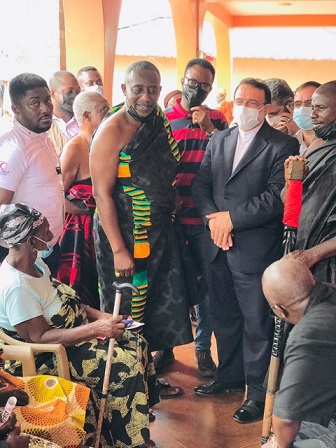 The Iran Clinic under the auspices of the Iranian Red Crescent has provided free health screening for over 300 aged and others at Akuapem-Mamfe, in the Eastern Region.

In collaboration with the Ghana Red Cross, their local partners, and the Kyidomman Council of Akuapem, they offered screening including laboratory services and the provision of medications to the people screened.

Dr Seyed Salahatpour, Medical Director of Iran Clinic who led the team said the gesture was in pursuant of the Red Crescent principle “to help the aged and the vulnerable who do not have access to timely healthcare”.

He said as part of the outreach programme organised periodically at various places, beneficiaries who were found to have conditions that needed further medical attention, were referred to Iran Clinic in Accra for treatment.

The Iran Clinic has operated in Ghana since 1992 and offers medical services such as maternity and Child Welfare, Physiotherapy, Pediatric, and Emergencies among others.

The clinic as well accepts the National Health Insurance Scheme and other private insurances to provide access to affordable healthcare to clients who patronise their services.

Earlier, the Head of Mission of the Iranian Embassy, Mr Bjan Gerami who paid a courtesy call on Osabarima Ansah Sasraku, Chief of Mamfe, and Kyidomhene of Akuapem indicated that the gesture was an expression of the cordial relationship between the countries.

He disclosed that plans were advanced for the setting up of another branch of the clinic in a remote part of the country in line with the Iranian Red Crescent principle.

In discussions with the Chief, he gave the assurance of partnering with Iranian companies to support Mamfe in the area of youth development.

Osabarima Ansah Sasraku, on his part, commended the Iran Clinic for the kind gesture noting that it was the second time they had extended such an offer to the area.

He expressed the hope that their relationship would grow in the larger interest of the bilateral relationship of the two countries.