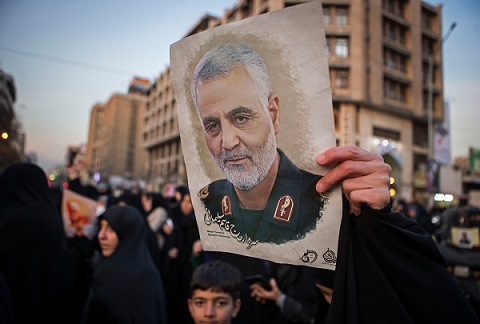 Iran has expanded the list of Americans suspected of involvement in the assassination of its senior commander Qassem Soleimani to include 48 names, official news agency IRNA reported Sunday.

“The number of the main accused in the assassination of Soleimani has increased from 45 to 48,” said Hossein Amir Abdollahian, spokesman for the Popular Committee for the Celebration of the Anniversary of the Martyrdom of General Soleimani.

Speaking at a press briefing about judicial measures regarding the case, Abdollahian voiced hope to see a court ruling “in the near future.” Six countries have been given warrants from Iran for the arrest of the culprits, the spokesman said.

A “harsh revenge” for the killing of the high-ranking Iranian commander is still on the agenda of the Iranian authorities, Abdollahian noted.

A U.S. airstrike on Jan. 3 near Baghdad International Airport killed Soleimani, then commander of the Quds Force of Iran’s Islamic Revolution Guards Corps, as well as Iraqi militia commander Abu Mahdi al-Muhandis. On June 29, Tehran Prosecutor General Ali Qasi Mehr announced that a case had been filed with the Interpol to arrest a number of U.S. political and military officials “involved in the assassination.”