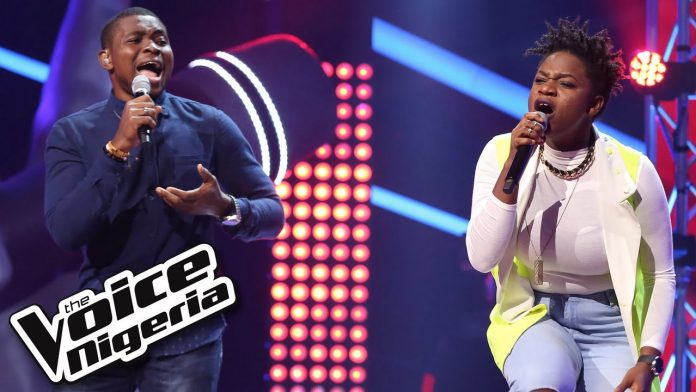 With 16 talents making the live shows of Airtel The Voice Nigeria season 2 already, contestants are set for ‘battles’ in the episode 9 of the competition on Sunday, 13th August, 2017 to claim a spot in the next phase.

Of the 16 talents through, four of them made it as a result of a steal. Coach Patoranking was the first to use his ‘stealing’ option, poaching Daniel from #TeamWaje. Coach Waje got hers back when she stole Favour from #TeamPato. Coach Timi Dakolo stole Wolei from #TeamYemi and Coach Yemi Alade didn’t mince words when she stole Wilson from #TeamWaje.

So far in the Battle Rounds, we have seen talents delivering enthralling performances of love songs for a spot in the live shows.

In episode 8 of the show, #TeamWaje kicked off the contest with a performance by Obichi and Isaac. The duet performance of Korede Bello’s ‘Mr Romantic’ thrilled the audience and Waje was left with a difficult choice as she eventually settled for Obichi.

The next battle was between #TeamPato’s Tama Nisa and Annie. The duo performed ‘Beneath your beautiful’ by Labyrinth. Annie emerged winner of the contest. Hightee and Blesyn also performed ‘No Air’ by Jordin Sparks. Hightee performance was convincing enough for Coach Patoranking to grant her a spot in the Live Shows.

#TeamYemi put forward the pair of Majeeka and Wolei. The contestants performed ‘Toh Bad’ by Niyola. Majeeka won the Battle, but Coach Timi made Wolei the first steal of the night, handing him a chance to make the Live Show in his team.

#TeamTimi’s Blessed and Bada were dynamic in their performance, building momentum and delivering complex vocals to the song. Both showcased huge range and seemed to bring the same strengths to the table. Neither really stood out. Rather, it felt like a real duet, they both worked together to craft an entertaining performance of Stevie Wonder classic ‘Signed, sealed delivered’ in their battle. Coach Timi chose Bada at the end.

The final battle of the night was between #TeamWaje’s Glowrie and Wilson. Coach Waje gave them ‘Hurt you’ by Toni Braxton and Babyface to sing and it’s without a doubt the performance of the night. It’s nearly an impossible decision for her, but she chose Glowrie. Coach Yemi who was excited about the performance described it as one that gave her “goosebumps”. She thereafter poached Wilson to her team.

As the battles for a spot in the Live Show continues, coaches are also faced with more difficult decisions in picking talents that will make the next phase.