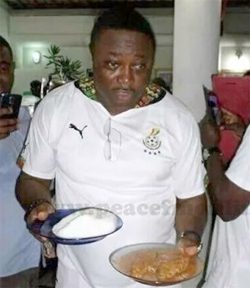 SOCCER FANS who were flown to Brazil to support the Black Stars at the ongoing World Cup expressed shock when they were compelled to watch the Ghana/Portugal Group D match on television sets at Natal.

The disappointed supporters could not contain their emotion as they were denied the chance of watching world best player, Cristiano Ronaldo, physically.

The supporters were seen openly cursing their stars following the weird decision by the committee responsible for their welfare.

The committee on Wednesday assured the supporters that they would be emplaned from Natal to Brasilia on Thursday to watch the Ghana-Portugal encounter and cheer the Stars up.

The list of the supporters ? with regards to how they would be flown to Brasilia ? was boldly pasted on notice boards at the Mardunas Hotel.

The enthusiastic soccer fans were seen checking their names and the time of their departure on the boards.

But they became extremely disappointed when they were told that the trip had been cancelled at the eleventh hour and so they should watch the match on TV.

Some of the supporters became agitated and so they protested vehemently, but the committee still stood its grounds.

In the end, the dejected supporters had no other option than to stay in their rooms and watch the Portugal-Ghana crunch match on television.

It will be recalled that about 500 soccer fans, including movie and music stars, passed the night in an open place at Forteleza Airport last Saturday, after Ghana?s match against Germany.

Among those who slept on the bare floor were Jackie Appiah, John Dumelo, Gyedu Blay Ambulley, Kobby Woyome, MP for South Tongu among others.

That was after the Black Stars had held tournament favourites ? Germany ? to a pulsating 2-2 drawn game at Forteleza.

The fans had to sleep at the airport because the committee responsible for facilitating their journey back to their Natal base was nowhere to be found.

US Main Target of Cyber Criminals Followed by UK, Germany