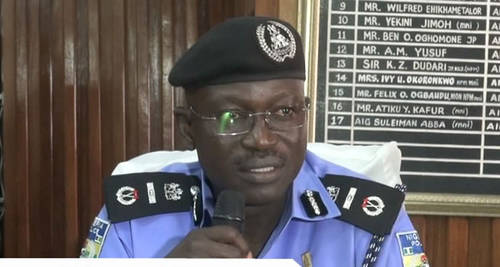 Fear of uncertainties hover the air in Akwa Ibom State as radio and television announced the return of Mr. Isaac Gabriel Achong as the Police Commissioner of the State. Mr. Ochong who left state in 2010 as the Deputy Commissioner of Police under a controversial circumstance linking him to state sponsored kidnapping and assassination arrived the state capital, Uyo yesterday amid celebration by members of Akpabio?s government. Reacting to news, an Uyo based human right activist, Mr. Bassey Edem said the return of Mr. Achong to Akwa Ibom State as the ?Commissioner of police was the handiwork of Governor Godswill Akpabio to prepare ground ahead of the 2015 election in his favor.? Mr. Edem noted that Mr. Achong?s name was not included in the names of those recently published as newly appointed commissioners of police apparently to prevent furor that might greet his appointment.

?Let me tell you. It is Akpabio that lobbied for the man to come to Akwa Ibom State in order to perpetuate terror during the election and scare his opponents into submission. ?In 2010 were politically motivated kidnapping and assassination were the order of the day, didn?t the people of the state cry foul and asked the Mr. Achong to be transferred out of the state? Why is he suddenly backed again during the same period?? Edem asked.

He recalled that ahead of the 2011 general election which ushered in Mr. Akpabio into the government house for the second term, hundreds of people were abducted for ransom and some murdered in broad daylight. And Mr. Achong was said to be in charge of negotiation for payment of ransom which he smiled to the bank with millions of Naira.

?There were so many victims; you can check in the internet you will see. Some of the victims of kidnapping included retired General Edet Akpan kidnapped during a church session in his home town, Mrs. Sam Enwang at school near Ekom Iman, the Principal of Mobil Pegasus Primary/Nursery School in Eket, Mrs.?Lakshmi?Tom-Bush Itauma, a native of India, Sen. Aloysius Etuk?s wife, Mr. Michael Bush?s wife, Dr. Uwah, Mrs. Mfon Uko, Mrs. Philomena Udonwa who was also killed, to name a few. ?Mr. Edem recalled.

He further stated however that until, Mr. Achong was sent packing, the citizens of the state knew no peace. And that in 2010, as result of his complicity to kidnapping for ransom, the state House of Assembly voted unanimously ordering him to vacate his position and leave the state after 15 years. It was only then that peace began to return to the state.

?Since Achong?s departure, kidnapping is seen as a thing of the past but now the citizens are worried that they will have to relive it all over again as Achong returns to perpetuate his unfinished business of kidnapping he championed. You can see that upon moving to Abuja in the capacity of Deputy Commissioner, he worked his way up to be promoted recently among other 20 Commissioners by the Acting IG of Police, Suleiman Abba. This evening, the state radio station in Uyo announced and celebrated his return but the people of Akwa Ibom are not celebrating Mr. Achong, let alone being happy? ?The activist cried out

He called on Acting Inspector General of Police, Mr. Suleiman Abba to transfer Mr. Achong out of Akwa Ibom state to avoid bloodshed and kidnapping that occasioned during his stay in Akwa Ibom State as the ?deputy commissioner of police.