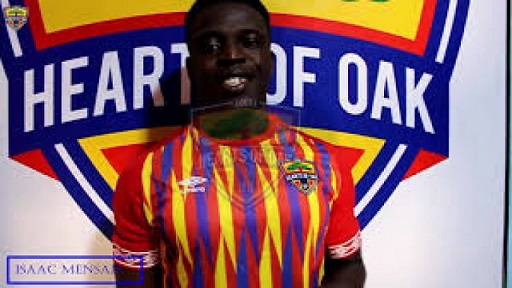 A second half strike by Isaac Mensah ensured Accra Hearts of Oak secured maximum points against Medeama SC. in a match-week 23 encounter  of the 2021/22 Ghana Premier League played at the Accra Sports Stadium on Saturday.

The Phobians having secured all three points temporarily moved into the top four with 36 points ahead of their Super Clash encounter against league leaders Asante Kotoko next week.

Ghana International Sulley Ali Muntari missed his second game for the Phobians with Caleb Amankwah making his second successive start at the heart of the defence together with regular Mohammed Alhassan.

It was a fairly balanced start to the game with Kwasi Donsu coming close from a well-struck free-kick which was saved by Hearts goalkeeper Richmond Ayi.

Hearts striker Kwadwo Obeng Junior was very lively upfront for the Phobians and nearly found the back of the net with an acrobatic strike which narrowly missed the target.

A defensive blunder by Medeama player Kofi Asmah nearly gifted Hearts the lead  but Obeng Junior could not place his shot past goalkeeper Kamil Anaba.

The highly enthralling first half ended in a stalemate.

The pressure from the Phobians did materialize after Isaac Mensah powered in a ferecious header in the 56th minute after a delightful cross from Barnieh.

Medeama after going a goal down were forced into making three substitutions halfway through the second half and substitute Justice Mensah nearly found the back of the net, but his shot was deflected wide.

Mensah seemed to have sparked the Medeama attack with his stature and was causing problems for Mohammed Alhassan and Caleb Amankwah and nearly came close in the 75th minute with a long range header which went wide.

The boys in the “Mauve and Yellow” were very dominant with a quarter of the game left but lacked the cutting edge to break the Hearts defence.

Obeng Junior should have made it two for Hearts in the 84th minute after beating the goalkeeper Kamil Anaba but couldn’t tap in from close range with the open goal at his mercy.

Hearts held on to secure all three points at the end of 90 minutes.

Hearts Of Oak In Comfortable Lead After Beating Accra Lions