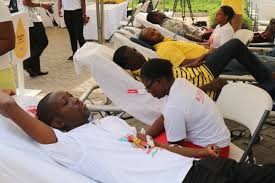 Mr Kwaku Agyeman Manu, the Minister for Health, says Information Services Department (ISD), is set to engage the public to disseminate messages on blood donation in the various dialects.

He explained that it would help to improve voluntary blood donation and reduce the over-reliance on replacement donations by family relations and friends of patients who required blood transfusion therapy.

Mr Agyeman Manu told Parliament on Wednesday in an answer to a question by Dr Dickson Adomako Kissi, the Member of Parliament (MP), Anyaa Sowutuom, on activities the Ministry was engaged in to improve blood donation in the country and available benefits to donors.

“Mr Speaker, the Ministry’s priority is to improve voluntary blood donation and reduce the over-reliance on replacement donations by family relations and friends of patients who required blood transfusion therapy.

“In line with this, the National Blood Service (NBS) undertakes continuous public education programmes in the print and electronic media to heighten public awareness of voluntary blood donation,” he said.

Further, the sector minister said on the floor of Parliament that simple but meaningful information on blood donation was published daily in the Daily Graphic and social media.

“Mr Speaker, blood donation activities also take place in some closely-knit communities in urban areas such as fishing communities and Zongos,” he said.

According to the Minister, the Health Ministry had also reached out to all its agencies and other Municipal District Assemblies to incorporate blood donation into their annual work programmes adding that the response by the agencies had been encouraging.

He informed the House that blood donors were educated and encouraged to maintain healthy lifestyles to avoid diseases and be able to donate regularly once every four months.

He clarified that the donors received free blood group tests and medical examinations and or health checks, and those with medical conditions unknown to them were referred to the nearest health facility for appropriate management.

“Mr Speaker, regular blood donation is known to lower blood pressure and reduce the risk of cardiovascular conditions such as heart attack.

“A donation of one unit of blood can save up to three lives. People who regularly donate blood feel particularly good about their altruistic acts which are known to have positive health outcomes such as the lower risk of depression and greater longevity,” he said.

MSMEs in Kassena-Nankana West urged to take advantage of AfCFTA

Students engaged in KNUST morale, processions will be dismissed