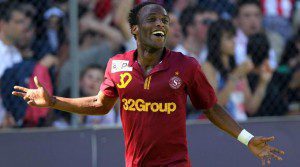 Ismahel Yartey made his debut for Portland Timbers last night

The 25-year-old, who joined the club at the start of the month, started the match which was dominated by the home side.

He was lively with a perfect combination with Liberia-born attacking midfielder Darlington Nagbe.

Yartey was substituted in the 74th minute as his side coasted to the important away victory.

He was lucky to have Ghana coach Avram Grant watching as he managed at least to the chance to show the Black Stars coach what he could do.

Portland Timbers acquired Yartey on loan from French side Sochaux while he was with Swiss Super League side FC Sion.