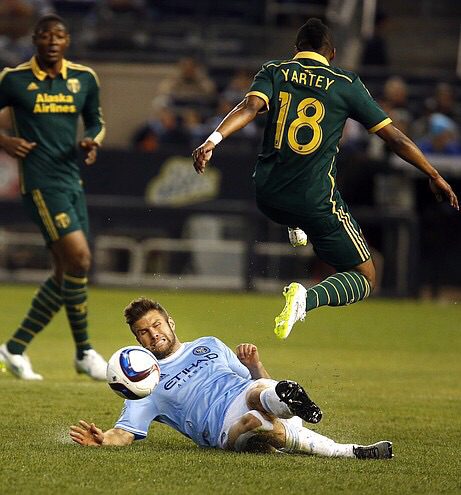 Ishmael Yartey in action for Timbers in the MLS

The 25-year-old who is on loan from French side Sochaux FC was handed a starting berth by Timbers coach Caleb Porter and he dazzled in the game, making impressive cutting runs with artful skills while stealing balls and picking the pockets of opponents.

In a double instance, the former Ghana U17 starlet came close to scoring the opener of the game but his efforts were thwarted by opposition shields inside the box.

Yartey joined Timbers two weeks ago but had to wait to make his debut on Sunday as he had to fall in line with Timbers? style of play and gain match fitness.

?It was great to get on the pitch and play once again. I feel very excited,? he told GHANAsoccernet.com.

While Yartey was in action, goalkeeper Adam Kwarasey was also manning the post for Timbers with midfielder Kwadwo Poku coming off the bench to play for New York City FC ? the vanquished side.