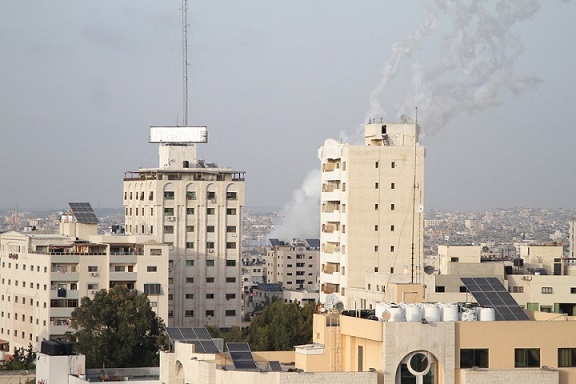 Israel carried out airstrikes against the Gaza Strip after rockets were fired Monday from the territory toward Jerusalem.

After hundreds of Palestinians were injured in clashes with Israeli police in East Jerusalem on Monday morning, Hamas, which rules the Gaza Strip, launched rocket attacks against Jerusalem in the afternoon. The international community has voiced deep concerns over the surging tensions and violence in the region, calling on all sides to exercise maximum restraint and take immediate actions toward de-escalation.

An Israeli military spokesperson said in a statement that Israeli fighter jets struck an offensive tunnel belonging to Hamas. According to Israeli media, several militants inside the tunnel were killed in the attack. The Israeli air force struck additional sites belonging to Hamas, including two rocket launchers and two military posts. The Hamas-run health ministry in the Gaza Strip said in a statement that 20 people were killed, including nine children, and 65 others wounded on Monday evening in explosions in the town of Beit Hanoun, northern Gaza Strip.

However, the Hamas statement did not explicitly blame Israeli airstrikes for the deaths. The sharp escalation began at 6 p.m. local time (1500 GMT) after Hamas set an ultimatum for Israel to withdraw its forces from the Al-Aqsa Mosque compound in East Jerusalem, where Israeli police injured hundreds of Palestinians in clashes earlier on Monday. After the deadline, Hamas launched seven rockets at Jerusalem, said the Israeli army, adding over 100 rockets have been fired against southern Israel.

Confrontations at the Al-Aqsa Mosque compound in Jerusalem’s Old City have been intensified following a court ruling that tried to evict several Palestinian families from their homes in the Sheikh Jarrah neighborhood in East Jerusalem.

With tensions running high, the Israeli Justice Ministry said on Sunday that it would postpone a court hearing over the possible eviction in Sheikh Jarrah.

“In light of all the circumstances and the attorney general’s request, the regular hearing for tomorrow, May 10, 2021 (is) cancelled,” it said in a statement, adding that a new hearing would be scheduled within 30 days.

Earlier this year, a district court ruled in favour of Jewish settlers who claimed the property of land in the Sheikh Jarrah district. The decision was seen by Palestinians as part of an Israeli campaign to drive them from traditional Arab neighborhoods. The Israeli government has downplayed the Sheikh Jarrah controversy and denied any government’s involvement in the dispute.

The Israeli Foreign Ministry said on Friday that it was a “real estate dispute between private parties.” In the 1967 Six-Day War, East Jerusalem, along with the West Bank and Gaza Strip, was captured by Israel. The Palestinian people seek all three areas for a future state, with East Jerusalem as their capital.

The rising tensions between the two sides have drawn concerns from the international community, which is calling for an immediate de-escalation. Zhang Jun, China’s permanent representative to the United Nations, on Monday expounded China’s position on the situation in East Jerusalem during emergency closed-door consultations of the Security Council, according to the Chinese mission.

China is deeply concerned about the escalating tensions and violence in East Jerusalem. The serious clashes between Israeli security forces and Palestinians in the past days are disturbing. China condemns the violence against civilians, calls on all sides to exercise restraint and refrain from provocative actions and rhetoric, and encourages immediate actions toward de-escalation, said Zhang.

U.S. Secretary of State Antony Blinken on Monday urged all sides to de-escalate Israeli-Palestinian clashes while recognizing Israel’s right to self-defense in the face of rocket attacks. “We’re very focused on the situation in Israel, West Bank, Gaza, very deeply concerned about the rocket attacks … that need to stop and need to stop immediately,” Blinken said.

Blinken welcomed Israel’s decision to reroute an annual nationalist flag parade and postpone the decision on the eviction of Palestinian families from the Sheikh Jarrah neighborhood in East Jerusalem. “It’s imperative that all sides take steps to de-escalate and calm the situation,” he stressed.

All leaders have a responsibility to act against extremists and to speak out against all acts of violence and incitement,” Guterres said in a statement. Middle East countries, including Egypt, Turkey, Jordan, Iraq, Syria, the United Arab Emirates, and Iran, as well as the Arab League, have condemned the Israeli actions against the Palestinian people in East Jerusalem.