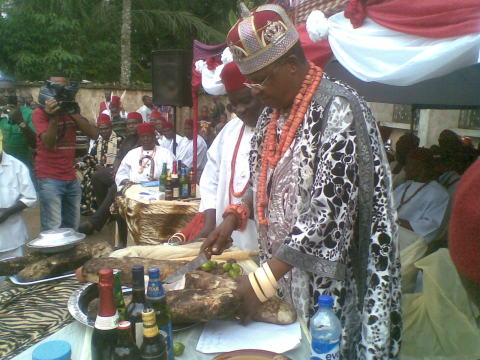 It was an atmosphere of ecstasy, glitz and glamour as the entire Isuofia Community converged on the Civic Centre to commemorate the 2014 Iwaji Ndi-Isuofia Cultural Festival. Isuofia, one of the communities in Aguata Local Government Area of Anambra state is endowed with rich cultural heritage handed down to them by their forebears. One of such traditional norms inherited from their progenitors is the New Yam Festival often used as an occasion to express profound gratitude to the gods of the land for bountiful harvest after having toiled in tilling and cultivation of the crop during the planting season. Libations were poured and prayers were made in honour of the gods of the land usually done by the eldest members of the family, clan, kindred and what have you inorder to request for more bountiful harvest in the next planting season while celebration rend the air as the new yam were cut and shared amongst the people and they all eat with gusto and

relished the joy that came with the new yam.

That ceremony portrayed the fact that yam is the indeed the king of crops and highly revered by the Igbo race and all those who acknowledged its significance. The new yam festival is a cultural identity of the Igbo-speaking people because culture itself derives its definition from the food, language, marriage, clothing, values, mores, beliefs, taboos of a particular people which distinguished them from others. The celebration of new yam festival is one out of the numerous cultural values that is peculiar to the Igbos and the occasion afforded a veritable platform for socialization and other forms of inter-personal relationship as people used the occasion to re-unite with families and friends, establish relationships, watch masquerade dance, wrestling competition, cultural dance displays to mention a few while others feast their eyes on other side attractions.

That was the situation at the 2014 Iwaji Isuofia festival spearheaded by the traditional ruler of the community, His Royal Highness Igwe Christopher Moghalu. The festival which began on Thursday 7th August and ended on Saturday 9th August 2014 had virtually all the illustrious sons and daughters of Isuofia community in attendance including the Anambra State Commissioner for Environment Chief Everestus Ubah whom the traditional ruler bestowed a Chieftaincy title upon on the occasion. It was indeed an atmosphere of conviviality and fun-fare at the Isuofia Civic Centre where HRH Igwe Christopher Moghalu lifted the roasted new yam up in thanksgiving to the gods and ancestral spirits in Isuofia Land for reaping bountifully for the little they put in the ground amidst cheers from the crowd that thronged the civic centre. Masquerade dance and other cultural performance added glamour to the event. The Anambra State Government was not left out in the celebration

There were also visitors from other neighbouring South-east states and the entire country who graced the occasion to savour the rich cultural heritage of Isuofia people. On the occasion the traditional ruler HRH Igwe Christopher Moghalu said that the 2014 Iwaji Isuofia began with the display of new yams at the markets in Isuofia and that with the display of the new yams he proclaimed the eating of the new yams in the entire community. Igwe Moghalu narrated that he used the 2nd day of the celebration to perform the ceremonial cutting and eating of the new yam with local sauce in his palace. Igwe Moghalu further stated that the 3rd of the celebration which was the climax of the event held at the Civic Centre Isuofia was an occasion for all the villages, clans, and kindreds in Isuofia and for him to publicly declare the cutting and eating of the new yam for the people along side music and dancing. He said that Iwaji Isuofia was part of the efforts in

protecting the customs and traditions of the people of Isuofia community and that the significance of the Iwaji festival was primarily to give praises to the gods for bountiful harvest and praying for the forth coming farming season to be better than the previous years. Igwe Moghalu therefore stressed the need for people to embrace agriculture and strive for self-sufficiency especially as the state government currently placed priority attention on the agric sector.

The State Governor Chief Willie Obiano who was represented by his Deputy Dr. Nkem Okeke brought good tidings from the state government to the people of Isuofia Community. The new yam festival afforded the State Governor ample opportunity to re-assure the people of Isuofia of government?s willingness to attend to the infrastructural needs of the community. Although he craved the indulgence of the people to be patient as government was determined to revamp the entire state but reaffirmed that Isuofia community will benefit immensely from the present administration. The Governor therefore used the occasion to remind the people of the need to participate actively in the forthcoming distribution and collection of permanent voter card and registration of voters in the state stressing that it is of paramount importance that they obtain the permanent voter card to enable them participate in the 2015 general election. While the people of Isuofia listened with

rapt attention, Governor Willie Obiano also acknowledged that through the efforts of his administration security has been intensified in Anambra State while miscreants have fled from the state.

For the state commissioner for Environment Chief Everestus Ubah who is also an indigene of Isuofia, the new yam festival is an occasion for socialization as it brings the people from far and near to come home and celebrate with one another. Chief Ubah said that the 2014 Iwaji Isuofia was significant in the sense that the people of Isuofia hosted him in recognition of the fact that he was made a commissioner and a member of the Chief Willie Obiano?s cabinet which he described as no mean feat. He however posited that Iwaji Isuofia is a veritable platform for them to showcase the rich cultural heritage of Isuofia community to the rest of the world.

On the other hand the state commissioner for local government and Chieftaincy Matters Hon. Mrs. Azuka, Enemo noted that Isuofia community is known for peace and progress. She said that the community is blessed with customs and traditions well respected and revered by the people and the celebration of the new yam festival was indeed remarkable. Mr. Madueke Mac Muobike the Managing Director and Chief Executive Officer of Mac Mourtz Nigeria Limited also an indigene of Isuofia community while giving verdict about the new yam festival noted that 2014 edition of Iwaji Isuofia was his first experience since the inception of the festival. Mr. Muobike stated that such convivial atmosphere provided by the festival was necessary to enable them rally round one another and chart a new course for the community. He maintained that Anambra State is the heartbeat of the entire Igbo nation which according to him is basically why the new yam festival is held in very high

esteem in the state. Mr. Muobike therefore urged the Anambra State Government to protect, preserve and promote the customs and traditions of the people as well as promote the speaking of Igbo language to save it from extinction. Chairman of Augata Local Government Area Hon. Chukwuma Umeoji described the 2014 Iwaji Isuofia as very commendable following the way and manner in which the traditional ruler HRH Igwe Christopher Moghalu piloted their affairs. Hon. Umeoji stated that he has a proposal before the Anambra State Government on the intended Aguata Cultural Gathering which according to him will be actualized before December 2014. He also used the occasion of the Iwaji Isuofia 2014 to say that he has done quite a lot to promote and preserve the customs and tradition of the people of Isuofia Kingdom while urging all and sundry to save Igbo culture from untimely death.

The 2014 Iwaji Isuofia festival witnessed a large turn-out of sons and daughters of Isuofia kingdom home and abroad as well as friends and well-wishers who gathered at the Isuofia Civic Centre to give honour to the King of crops- ?Yam?. The event attracted top government functionaries, politicians, industrialists, business moguls and other cream of the society. With the feat recorded by HRH Igwe Christopher Moghalu in the 2014 edition of Iwaji Isuofia, it is equally expected that the 2015 Iwaji Isuofia would be another platform for cultural exhibition in Isuofia community.