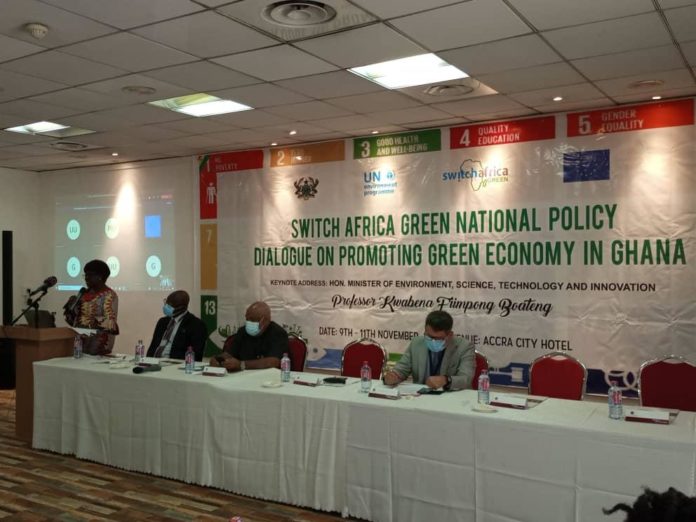 Professor Kwabena Frimpong-Boateng, the Minister of Environment, Science, Technology, and Innovation (MESTI), says “it is in the interest and the good of humans to embrace sustainable practices to survive.”

He said because, the survival of humans was dependent on the ecosystem and called for a stop to the exploitation of natural resources through activities including, deforestation, mining, plastic pollution, electronic waste and unsustainable agriculture practices.

Prof. Frimpong-Boateng said this in a statement read on his behalf at the opening of the National Policy Dialogue on promoting a green economy in Accra.

The event sought to analyse the existing policy frameworks under the Switch Africa Green Priority sector and deliberate on opportunities, challenges, and barriers faced by the private sector in the transition to an inclusive low carbon green economy.

The three-day National Policy Dialogue, which would usher in the second phase of Switch Africa Green Programme, was jointly organised by MESTI and the Ghana National Cleaner Production Centre (GCPC), under the Environmental Protection Agency (EPA), with support from the UNEP and UNDP and funded by the European Union (EU).

He said Ghana as a signatory to the 2030 Agenda for Sustainable Development (SDG) had demonstrated her commitment to implementing the SDGs by submitting her Voluntary National Review Report to the UN-High-Level Political Forum in 2019.

Prof. Frimpong-Boateng said a stock-taking exercise conducted by Partnership for Action on Green Economy (PAGE) revealed that at least 26 major projects, which had green economic elements, had either been implemented or were taking place in the country.

Mr Roberto Schiliro, the Head of Infrastructure and Sustainable Development Section of the European Union Delegation, noted that the Switch Africa Green Programme by the EU was to support African countries in their transition to an inclusive green economy and in promoting a shift to sustainable consumption and production patterns and practices.

He said the priority areas for EU in the next year would be the green economy, urban management and climate-smart agriculture as well as biodiversity.

Mr Anthony Mensah, a Director at the Ministry of Sanitation and Water Resources, said the Ministry with green economy in mind had initiated 16 integrated recycling plants projects, which were at different stages of completion.

He said the projects at their completion would recycle 40 per cent of the country’s waste, which would generate compost to be used in the agriculture sector to boost crop production.

Mr Mensah said the Ministry would review its regulations such as the National Environmental Sanitation Strategy and Action Plan to reflect the demand of the SDGs.

He said the Policy Support component of the programme helped strengthened institutions and created the enabling policy environment, appropriate tools and instruments, which included policies, regulatory frameworks, fiscal and market- based instruments that supported a private sector-led inclusive green growth.