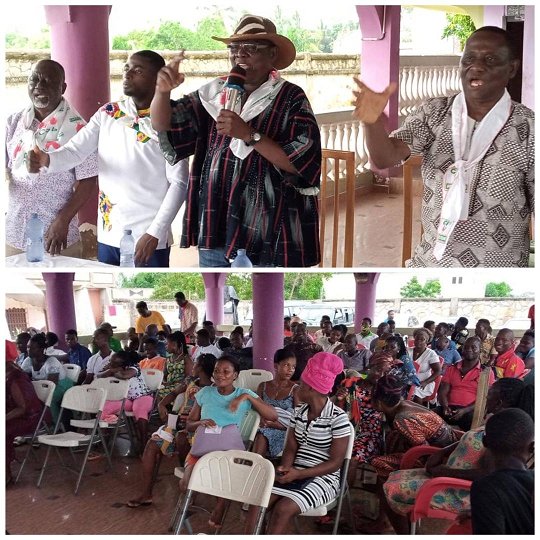 He expressed worry about the level of mismanagement exhibited by both the New Patriotic Party and the National Democratic Congress, adding they only brought division among Ghanaians.

Professor Boboobi said this when he met leadership and supporters of the Party at Akatsi during a day’s tour to the Volta Region.

“It is time we look elsewhere, it is time we start thinking beyond the NDC and the NPP, It is time we reject parties built on structures that can only benefit a few, they have divided us, and in all these years of their rule, there has been no significant change in our well-being nor an improvement in the quality of our lives,” he said.

He said the next CPP government would restore hope and dignity to all Ghanaians, and that there would be job security, food stability, oneness, among others.

He promised a multi-trillion dollar agricultural sector industry since the CPP was poised to institute a research centre for effective growth in all their key sectors of development.

Mr Thomas Ntumy, the Volta Regional Chairman of the Party, asked the electorates to vote massively for the CPP, because things were going in the wrong direction of the country.

“A vote for the CPP is a vote for yourself, we are also Ghanaians, Ghana is not for only a few people to enjoy,” he explained.

Leadership of the Party during the visit, out-doored Mr Maxwell Atsah Nana, the Parliamentary candidate for Akatsi South on the ticket of the CPP.

Mr Atsah in his message to supporters of the Party, indicated “it is time we realise that “our challenges as a nation will not be addressed by NPP nor NDC, our struggle will continue to defeat us if we don’t liberate ourselves from this oppression”.

He urged all to promote peace during these period of campaign activities.