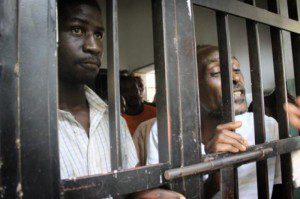 Prince pleaded not guilty to the charge but after full trial was found guilty by the court presided over by Mr Aboagye Tandor.

He is to serve five years for causing harm and 20 years for robbery in hard labour, both to run concurrently.

Earlier the prosecutor, Police Chief Inspector E. Afful told the court that the complainant is a taxi driver who resides at Adabraka, while the convict is an IT Technician and resides at Budumburam near Kasoa.

He said on August 16, the complainant was in charge of his taxi working as usual and at about 0200 hours, two men hired his service from circle to Dansoman, but did not specify the particular location they were going to at Dansoman.

The prosecution said on reaching an area in Dansoman called Sahara, one of his back tires became flat, so the complainant stopped to change it with a spare one.

Police Chief Inspector Afful said after fixing the tire and in his attempt to get back into his driving seat to continue the journey with the two men, he was prevented by Prince and his accomplice.

The complainant managed to remove the car’s key from the ignition apartment, but the convict used a small knife to stab his hand and palm, resulting in the key falling onto the street.

He told the court that the convict picked the key, pushed the complainant out of the car, and drove the taxi away, with the complainant’s driving license and an amount of GH¢ 440.00.

The prosecution said after the incident, the complainant lodged a complaint at the police station and during investigations and Prince was arrested at his hideout in Accra.

His accomplice is however on the run.

He said after the arrest of Prince, he took the police to Pacific Filling Station, Nyanyano road at Kasoa, where the taxi was retrieved and brought to the police station.