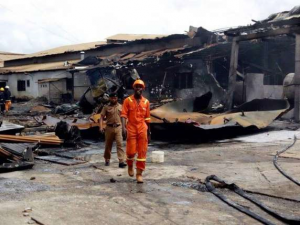 Mr Boakye Agyarko, Minister of Energy, has stated that the recent gas explosion at Atomic Junction should be a wake-up call to all Ghanaians to change their attitudes towards safety issues.

He said Ghanaians must also use the gas explosion to caution themselves to up their game in terms of the standard of safety, adding that safety begins with each individual.

Mr Agyarko made the statement during an interaction with the media in Parliament.

Mr Agyarko also advised the victims of Saturday’s gas explosion at Atomic Junction to file a civil suit at the court for compensation.
He said a civil action by the victims of the explosion against owners of the gas station would be in order.

He however criticised calls for a Commission of Enquiry to investigate the incident, adding the Ghana National Fire Service (GNFS) was capable of probing the cause of the explosion.

Mr Agyarko also stated that criminal action can be taken against the owner of the gas station if the Fire Service after its investigations proves that there was criminal negligence on his part.

He said the government after cabinet tomorrow would come out with policy directives on how to deal with the matter.