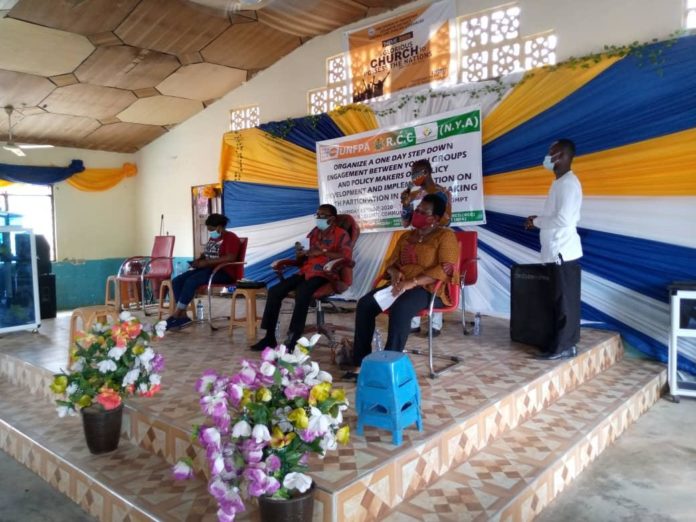 Madam Bushra Odoom, Ekumfi District Planning Officer has implored the youth to get involved in the activities of their district assemblies and ensure that their concerns were captured in the medium term development.

This, she stressed was the only way they could ensure that their issues with respect to education, health and unemployment were adequately addressed while holding their leaders accountable.

Madam Odoom made that call at a day’s step down engagement between some youth groups and policy makers on policy development and implementation on youth participation in decision making at Ekumfi.

It was organised by the National Youth Authority (NYA) in collaboration with the Regional Coordinating Council (RCC) with funding from the United Nations Population Fund (UNFPA).

Briefing the youth groups on how the Ekumfi District was involving them in their Annual Work Plan, Madam Odoom noted that majority of the youth did not participate in town hall meetings and community durbars organised by the Assembly to the detriment of their Areas.

According to her, formulation of the medium term plan of the Assembly started with such meetings and therefore their refusal to participate in them meant that their views and concerns would not be factored in.

She said the local governance structure was anchored on bringing development to the Assemblies through stakeholder engagement on the best possible ways to meet the livelihood needs of the people.

She encouraged the youth to avail themselves for the District Assembly elections to effectively contribute to the development of their communities.

At a similar engagement held at Ajumako, Mr Kojo Laryea, Ajumako Enyan Esiam District Budget Analyst urged the youth to form youth groups, register them accordingly for them to be recognised.

In this way, he said they could confidently approach the Assembly with their problems and demand accountability.
Mr Laryea admonished the youth to shun vices that could terminate their dreams and pursue higher learning to position themselves for any leadership opportunities that may come their way.

Mr Emmanuel Sodja Martey, Regional Director of the NYA urged the youth to develop their capacity and form advocacy groups to contribute to issues through debates and crafting solutions to numerous challenges facing them.

He advised the youth not to take the law into their hands when unhappy with leadership saying, holding someone accountable did not mean violence.