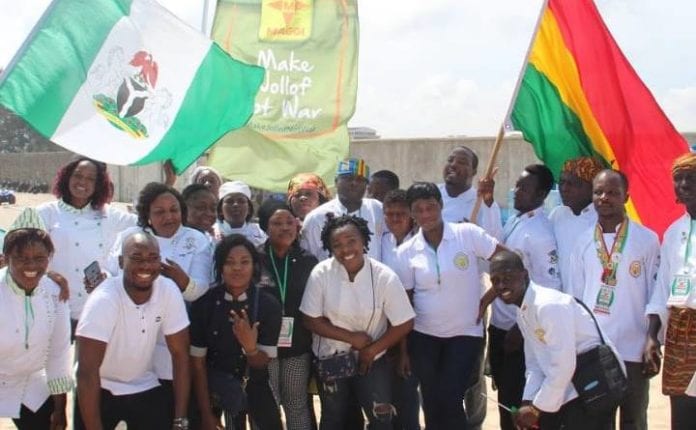 The Association of Professional Chefs Nigeria in partnership with African Chefs United has organized the 2018 Hospitality All African People Imbizo in Lagos.

Festival Brought together 18 countries to participate in activities and competitions aimed at strengthening and promoting African chefs cuisines across the continent.

Speaking at the opening ceremony, Ambassador Ikechi Uko informed chefs across the continent to let their plates tell the story of their passion to customers.” Chefs are serious brands as such African chefs must lead the story of African cuisines to the rest of the world.”

Dr. Wasiu Adeyemo Babalola, Senior Vice President and CEO of Africa for Continental Hotels and Resorts worldwide advised chefs across the continent to balance their passion for cooking with knowledge in entrepreneurship in order for them to lead the forefront in the business of selling African foods to the rest of the world.

Ghana won the students challenge with Zimbabwe and South Africa as first and second runners up. The Gambia chefs came out as winners of the Chefs In Green cooking with Zimbabwe and Togo as first and second runners up.
Ivory Coast was adjudged the overall winners of the African Chefs United HAAPI 2018 festival taking home a trophy, medals and prizes.

President of African Chefs United, Chef Citrum Khumalo during the closing ceremony appealed to chefs, cooks, food bloggers and culinary enthusiasts across the continent to join ACU in telling the African culinary story.”Get involved in your communities and help them eat nutritious and healthy sustainable foods. Work with stakeholders to ensure Africa surpass expectations in meeting the 2030 UN Sustainable Development Goal 2 Agenda on hunger and ACU calls on local and international partners to work together in achieving this.”

Speaking on how to inspire the younger generation to take up the chefs profession, award winning Ghanaian chef and founder of Food for All Africa, Chef Elijah Amoo Addo advised young chefs across the continent to adopt President Obama’s slogan “Yes We Can” as a mantra towards pushing indigenous African cuisines to the world.

He ended by saying “Africa’s economic independence will be meaningless until it includes a continent that strives to feed his population and the world with indigenous healthy and sustainable African recipes. This must be the place of the 21st century African chef in Global Gastronomy.

Chef Shine Akintunde Adeshina, President of the Local Organizing Committee expressed his teams profound gratitude and appreciation to sponsors, partners and stakeholders who ensured HAAPI Nigeria 2018 to happen. He called on corporate bodies across Africa to sponsor the 2019 HAAPI festival to be hosted by South Africa from 27th August-2nd September,2019 in Johannesburg, South Africa