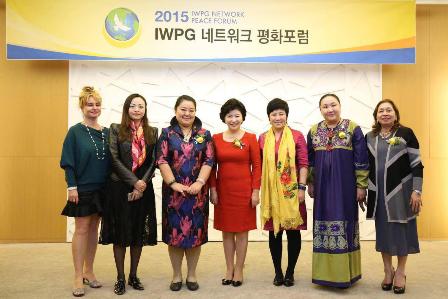 The participants signed the Statement to Urge for the Implementation of the International Convention which strengthened their resolve to continue to oversee and develop the adoption process for each state to abide by the provisions of the Convention presented by Heavenly Culture, World Peace, Restoration of Light (HWPL).

“The implementation of the Convention will bring forth world peace when women of the world unite as one with the heart of a mother and urge for it. We, women, are the start of world peace,” said Chairwoman Nam Hee Kim of the IWPG. She appealed to the audience to “work together with the IWPG until the day when 3.6 billion women become united.”

Known for his initiative of the International Convention, the global peace advocate – Mr. Man Hee Lee, Chairman of HWPL said in his congratulatory message, “Peace already dwells in us as many women representatives are gathering here today.” He added, “Let us all unite in the work of peace transcending borders, ethnicities, religions, and ideologies.”

President Setias-Reyes expressed her gratitude towards Chairwoman Kim. “She has paved the way for all women to work for the purpose of the cessation of war and world peace. The worldwide network of the IWPG has served as the foundation of a world of peace.” One of the Korean participants expressed her thoughts by saying, “As a mother who has to raise her children in the only divided country in the world, I was comforted and encouraged that war can actually be ceased. It is possible and hopeful.”

The IWPG, the host of the forum, is an international women’s peace organization actively working through over 700,000 members from 179 branches in 40 countries worldwide. As an active supporting organization of HWPL’s peace movement, the IWPG is currently leading the way to support women’s peace activities worldwide, including various volunteer services, academic education, and cultural and artistic exchanges.

HWPL, one of the biggest international non-governmental organizations, played a decisive role in ending the 40-year religious and political conflict of Mindanao, Philippines by implementing a Peace Agreement last January. The organization hosted the 1st Annual Commemoration of the World Alliance of Religions’ Peace (WARP) Summit in September 2015, which provided a platform to present the first draft of the Convention on the Cessation of War and International Armed Conflicts through its International Law Peace Committee. HWPL is at the forefront of accelerating the implementation of such a Convention.