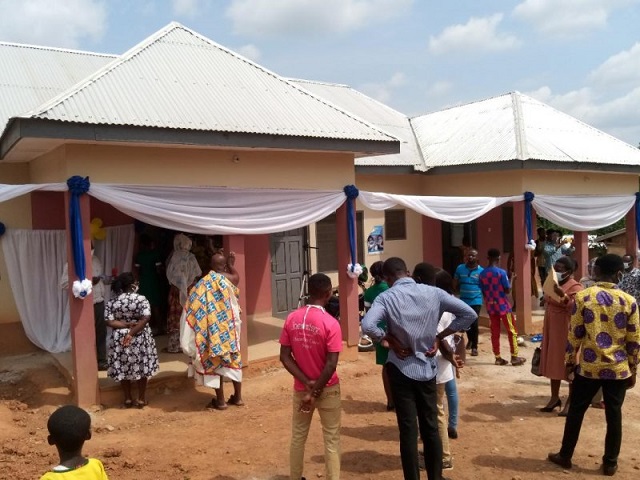 Mrs Tina Gifty Naa Ayeley Mensah, the Deputy Minister of Health, on Tuesday inaugurated a Community-based Health Planning Services (CHPS) compound to make health services accessible to the people of Jachie in the Tano North Municipality of the Ahafo Region.

The Chiefs and people in the cocoa-growing community could not hide their joy, when the Deputy Minister, also the Member of Parliament (MP) for Weija Gbawe, commissioned a solar project to provide the town with electricity.

Mrs Freda Prempeh, the MP for Tano North and Deputy Minister of Gender, Children and Social Protection, constructed the facilities, including a mechanised borehole.

The people, predominantly farmers, have to travel several kilometres to Duayaw-Nkwanta, the district capital before they could access healthcare services.

Mrs Mensah said President Akufo-Addo’s priority was to ensure that the health status of every Ghanaian improved, saying that was why the government revived the National Health Insurance Scheme.

She advised the people who were yet to register with the NHIS to access quality healthcare services.

Mrs Mensah advised the people to adhere to the various health safety protocols to protect themselves and people around them from coronavirus.

She said the aged remained the highest risk population and called on them to continue wearing nose masks in public places and frequently wash their hands with water.

Mrs Mensah commended the Tano North MP for the level of development in the constituency and called on the voters to retain her in the December 7, polls.

On her part, Mrs Prempeh who also presented a motorbike to nurses at the compound said she was putting up another CHPS Compounds at Rubi and Adongo which were almost complete.

The MP said she had supported the Subonpan and Subriso CHPS Compounds with medical devices and equipment as well as constructed a maternity block at Dwenase.
She also supported the Bomaa government hospital.

Mrs Prempeh said she had so far constructed 100 boreholes to provide potable drinking water to deprived communities in the area.

Mrs Eva Aryee, the Tano North Municipal Director of Health, said 10 CHPS Compounds were constructed in the Municipality in the past four years.

She said the Municipality required 10 more to meet the health needs of the people.

She thanked the government for providing the directorate with a pickup and also employing 150 nurses to serve the local communities in the area.

Nana Jonathan Yeboah, the Chief of Jachie, said the town would forever be grateful to the MP and the government for the level of development brought to the town.

He promised to support the MP and President Akufo-Addo to achieve their vision for the nation and the people.

Nana Yeboah said there were several adjoining settlements which needed potable water and electricity and appealed to the MP to support in that regard.