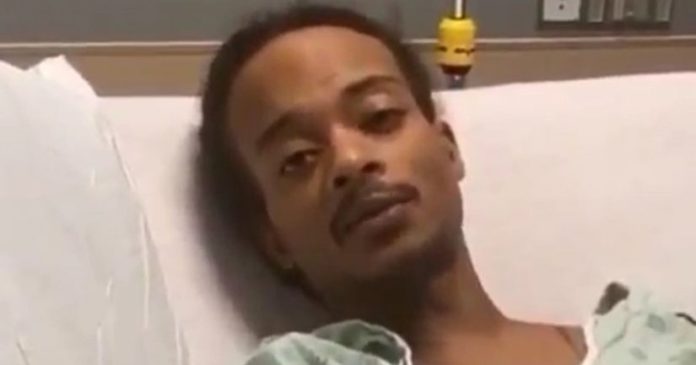 A man shot in the back by a Wisconsin cop in an incident that sparked protests over police misconduct pleaded not guilty Friday to felony sexual assault and other charges from his hospital bed.

Jacob Blake, 29, was sought by police on the charges when he was shot seven times in the back last month by a Kenosha, Wisconsin, officer in front of his three young children in a caught-on-video incident.

If convicted of the sex assault charge, Blake could be sentenced to as much as 10 years in prison.Blake – wearing a light blue shirt and a light yellow tie – waved his hand when he first appeared on the video. “Good afternoon,” he told court commissioner Loren Keating.

When Keating asked if he had any questions about the proceeding, Blake said, “Not at the moment, no, I don’t.”The domestic violence charges stem from an incident May 3, reports say, and involved the 28-year-old mother of Blake’s children. Blake was charged in the case July 6, and a warrant for his arrest was pending when he was shot.

In the days after being shot, Blake, who is paralyzed from the waist down as a result of the shooting, was handcuffed to his hospital bed. The handcuffs were later removed.

Blake on Friday was given a 10,000-dollar signature bond and was ordered not to have contact with the alleged victim. He was given a trial date in November.

Kenosha police officer Rusten Sheskey is accused of shooting Blake in the back seven times August 23 by the driver’s door of a car that contained Blake’s children – ages 3, 5 and 8. An investigation of the shooting is being conducted by the Wisconsin Department of Justice.

Cops encountered Blake that day as they responded to a call from a woman who said her boyfriend was unlawfully on property near the car’s location.

Ben Crump, another of Blake’s attorneys, has said Blake was shot as he tried to break up a domestic dispute, and was not part of one.