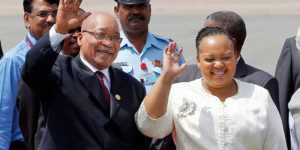 President Jacob Zuma?s wife Nompumelelo Ntuli-Zuma has reportedly been banned from his Nkandla home following claims of a plot to poison him.During his trip to the United States in August last year, Zuma was told that he had been poisoned, according to a report by the Sunday Times.Speculation about the couple?s relationship circulated after Ntuli-Zuma was cast out of the Nkandla residence last month and did not attend the State of the Nation Address. Sources close to the Zuma family have reportedly confirmed that Ntuli-Zuma was cast out after the president suspected her of involvement in efforts to poison him.She has reportedly been unhappy after being sidelined following allegations that she had an affair a few years ago.Zuma apparently suspected his immediate family after he was diagnosed by US and Russian doctors as only they have access to his food.The Presidency has refused to comment on the claims saying only that Ntuli-Zuma is still his spouse.

Churches in Agona West banned from worshiping in classrooms