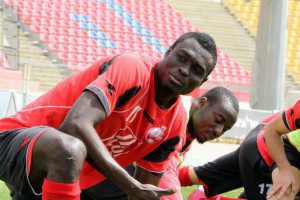 Former Hearts of Oak midfielder, James Bissue has confirmed that he is in talks with Premier League side Sekondi Hasaacas over a possible move.

Bissue, after ending his shorts stint with MLS side Impact Montreal in 2015 failed to land a deal in Ghana upon his return into the country.

However, ahead of the upcoming season, Hasaacas have set sights on James Bissue over a possible move as the players has been training with the club for the past three weeks.

“I have started training with Hasaacas last week. They have expressed interest in me and we are in talks but hopefully when the season starts everybody will see me in Hasaacas shirt.”

“I’m desperate to play in the domestic top-flight,” Bissue said.

Hasaacas finished 7th in the previous season season and are preparing seriously to be in the top four in the upcoming season.