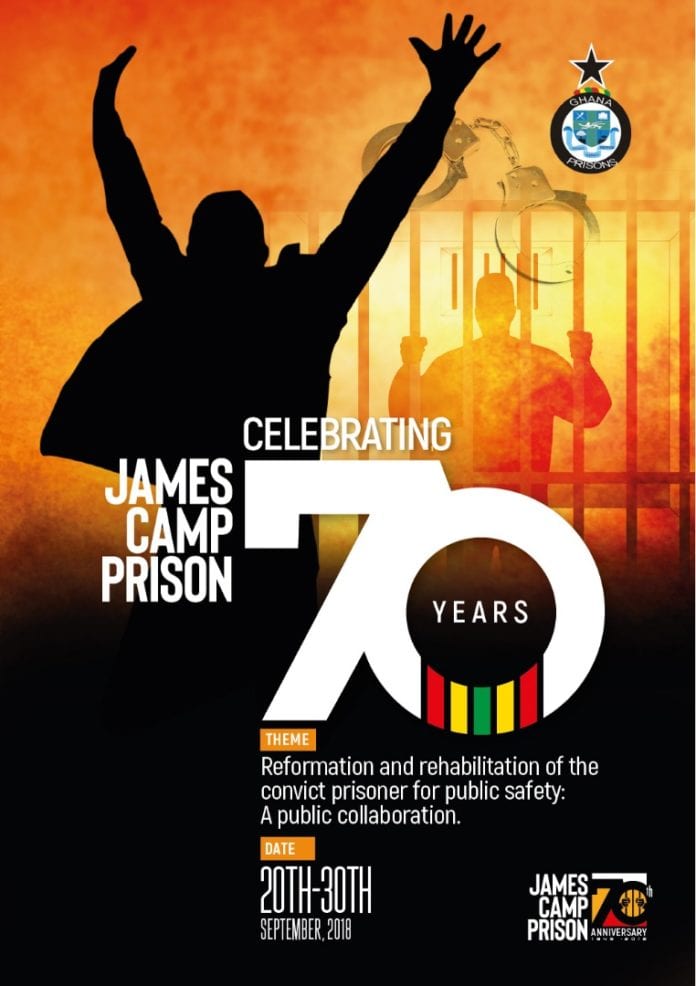 The James Camp Prison which is located at Ridge, Accra in the Greater Accra region of Ghana, is one of the oldest prison establishments in the country. Set up in 1948, the facility has rolled out activities to commemorate its Platinum Jubilee, starting from Thursday, 20th September, 2018, under the theme ‘Reformation and Rehabilitation of the Convict Prisoner for Public Safety: A public collaboration.’

The James Camp Prison is currently under the able command of Deputy Director of Prisons (DDP) Mrs. Patience Baffoe-Bonnie, who after taking over the mantle of the facility with its limited resources, the James Camp prison has seen improvement in its health delivery, feeding, and wealth systems but still calls on the general public to collaborate for an effective reformation and rehabilitation system.

Reformation programs such as, counseling sessions, motivational talks with inmates by ex-offenders and other well to do people, regular religious programs for both Muslims and Christians are also factors that have made the Ridge based prison facility one of the best Camp Prisons in Ghana.

Under rehabilitation, inmates have received training in specialized tailoring, landscaping, horticulture, fabric design and laundry services.
Others are; bead making, shoe making, canopy making, ceramics, and carpentry among others.

Most of the inmates who diligently went through these rehabilitative trainings are now employable and others utilizing the skills learnt inside the prison to set-up themselves up as business owners.

Challenges
The James Camp Prison, amidst its success chalked, also face challenges, it requires intensive support from the general public to put Ghana prisons on the industrial export maps.

The authorities of the 70 year old facility, led by DDP Mrs. Patience Baffoe-Bonnie, are calling for Public Private Paternership (PPP) in getting to set-up some rehabilitation and skill development programs. Tools for kente weaving, shoe making machines, a state of the art Computer laboratory, Industrial sewing machines for the Tailoring shops and other devices for the Carpentry shops.

The authorities of the James Camp Prison also calls on donors to help them build a 20-seater Water Closet toilet facility for inmates and renovation of existing but weak structures in the prison.

70th Anniversary program line up.
The 70th anniversary celebration will be launched at the premises of the James Camp Prison, which is located at Ridge, Kwaukudi junction, on Thursday 20th September, 2018, at exactly 9:00am.

On Saturday, 22nd September, there will be a street float, with the converging and starting point being the forecourt of the James Camp Prison, through Kawukudi-37 Military hospital road-Ako Adjei-Circle- Ghana Immigration Service Head quarters and then end at Prison Officers’ Training School.

The Blood donation, exhibition and Food Bazar will also be at the Prison Officers’ Training School. The general public is hereby urged to come donate blood to help increase the stock at the National Blood bank,to save lives.

There will be a stage Drama and Music talent show by inmates of the prison under the title, ‘Effective Reformation and Rehabilitation, the inmate’s Perspective’, on Tuesday,25th September,2018 at the James Camp Prison.

On Wednesday, 26th September,2018 at exactly 9:00am, there will be a Symposium at the Prisons Interdenominational Church, Cantonments under the theme, ‘Setting the Tone: The Service then, Now and the Way forward’ and the ‘Role of Training, Infrastructure, Logistics in the Reformation and Rehabilitation Agenda’.

Day five of the weeklong celebrations will be Thursday, 27th September, 2018 where there will be a Fundraising Event, which will take place at the Junior Officers Canteen, Cantonments at 1030hrs.

The 70th anniversary celebration of the James Camp Prison will be climaxed with various indoor and outdoor games, Food Bazar and spiced with a Fashion Show.

There will be a Football Match between the inmates of the facility and the Metro Team, and another completion in Tug of War, between inmates, officers and Metro team.

Funds Raised
Funds raised from the weeklong celebration will be used to revamp all shops, set up a creative art department to polish talents for the art industry, which requires minimum and no space for survival and establish a showroom to exhibit their products

The general public, Civil Society Groups, NGOs and well to do individuals are urged and invited to support and adopt projects and patronize its products for a robust suitable system.

Court sentences landlord for renting out facility without toilet