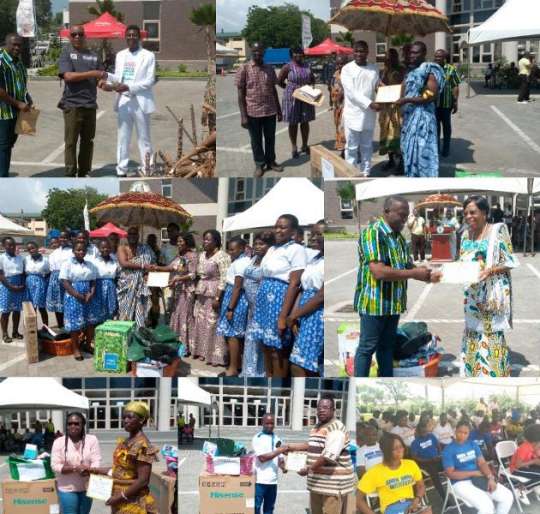 Mr Oblitey, who owns a fishing vessel and has eight permanent workers, is able to harvest 300 crates of fishes a day during the peak season.

He received a citation, a motorcycle, a television set, sets of cutlass, packs of gloves, and pairs of Wellington boots.

Mr Oblitey was awarded for his outstanding performance in his trade as well as general knowledge in agriculture, environmental consciousness and contribution to the growth of his community.

The awards were presented at the AMA’s 2019 Farmers’ durbar, held under the national theme, “Enhancing Small Scale Agriculture towards Agribusiness Development.”

The ceremony also rewarded the “St. Mary’s Senior High School” in Korle-Gonno as the “Best Institution in Agriculture.”

Mr Mohammed Adjei Sowah, the Chief Executive of the AMA, said farmlands were gradually being lost to developers, who had relocated to Accra, hence the need for the Assembly to promote backyard farming and livestock rearing.

Proceeds from backyard farming, he said, supplemented those obtained from the hinterlands and offered consumers fresh and natural produce, which were healthy.

He said even though the introduction of the ‘Closed Season’ for artisanal fishing generated protest from some fishermen, they could, however, attest to the fact that the initiative helped to replenish the water bodies with fishes and enabled the farmers to catch larger quantities.

The Chief Executive announced that Government would commence the construction of the James Town Fishing Harbour in January 2020, following the completion of the feasibility study on it.

Dr Charles S. Etse, the Metropolitan Director of Agriculture, in a welcome address, appealed to governmental and nongovernmental agencies to help in the establishment of cottage industries for processing and adding value to food to reduce post-harvest losses.

This would also enhance the income of farmers and fishermen.

In an effort to overcome challenges of loss of fertile farm lands to urbanisation, he said, the Department of Agriculture had assisted a number of households to cultivate gardens.

“Several inhabitants are now eating what they have grown themselves in their backyards. The days of ‘Operation Feed Yourself’ are back here with us again in Accra.”

The, therefore, encouraged those who desired to utilise their backyards productively to contact the agricultural officers in their areas for technical assistance.

The Amen Amen Institute, ‘an absolute autonomous institution’ and a partner of the United Nations, donated GH?5,000.00 cash and food stuffs to the AMA in support of the ceremony.

Amen Amenreynolds Amen, the Founding President of the Institute, said it was the obligation of every well-meaning citizen to support agriculture as it was the main sector driving national economic growth.

In an interview with the Ghana News Agency, Mr Oblitey said a major challenge fishermen faced was the damage to their fishing gear during strong oceanic currents.

He, therefore, urged the Government to fast track the construction of the Jamestown Fishing Harbour to provide protection for them at such times.

He urged his contemporaries to adhere to the traditional methods of fishing in order to control the dwindling fish stock.