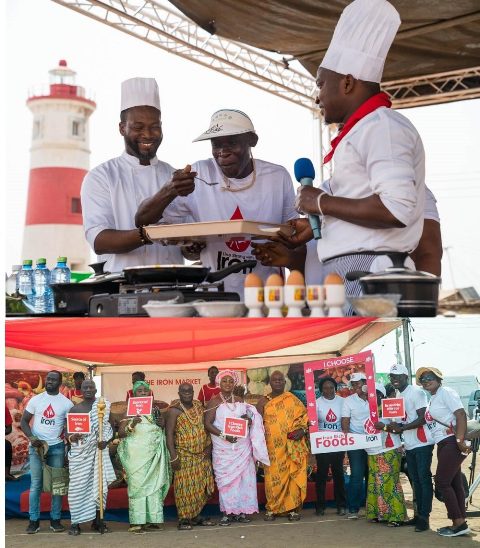 Residents of James Town, a suburb of Accra, were at the weekend educated on iron deficiency, a condition caused by lack of adequate healthy red blood cells.

The education was done through drama, music and expert nutrition advice and cooking demonstration.

It also featured an educative drama skit by Nii Commey and engaging interactions with the campaign’s ambassador, Adjetey Annan.

Prof Asiedu said: “Iron deficiency anaemia is a problem of serious public health significance, given its impact on psychological and physical development among women and children. Despite it being the most prevalent nutritional problem in the world today, it can be addressed if we all embrace proper nutrition”.

She encouraged the community to include iron rich foods in their daily foods such as cocoyam leaves, eggs, liver, and spinach, among others.

She said the latest Ghana Demographic and Health Survey (DGHS) indicated that 66 per cent of children under five are anaemic, 42 per cent of women in their reproductive (15- 49 years) and 45 per cent of pregnant women are also anaemic.

Madam Deborah Kwablah, the Corporate Communications and Public Affairs Manager at Nestlé Ghana, said the campaign aimed to raising awareness on proper nutrition and educating the public on Iron Deficiency in Ghana, its causes, consequences and solutions.

It also seeks to educate and empower, especially women and caregivers, to understand the important role iron plays in spurring activeness, productivity, and healthier lifestyles among individuals and families.

Madam Kwablah urged the public, especially women and children, to eat foods rich in iron to help curtail the deficiency.

She said Nestlé Ghana was happy to collaborate with stakeholders in the public and private sectors to educate as many people as possible and grow the social movement to a national scale.

The campaign would move to the other regions of Ghana to drive conversations to make iron deficiency and its solutions a centre stage in 2020.

It contributes to the UN Sustainable Development Goal-3; “Good Health and Wellbeing.”

The Fight against Iron Deficiency campaign will be rolled out through media, stakeholder and consumer fora, community engagements and educational materials, she said.