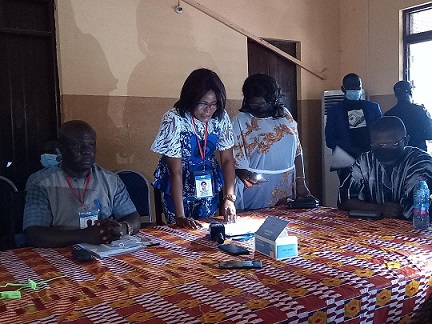 Mrs Adjornor thanked the President for nominating her and the Assembly members for her approval and said the commitment and concern for the development of the Jasikan Municipality had been demonstrated by her confirmation.

The MCE said her confirmation was a call to action, to change the lives of people and one that would cut across the political divides.

She assured that her doors would be widely open for developmental ideas, fruitful advice and contributions for the well-being of the constituents.

Mrs Adjornor said she would unite and work with all stakeholders irrespective of age and gender dynamic to ensure that the Municipality was transformed through developmental projects, quality education, skills development and empowerment, an improved health care delivery system and agriculture to improve living standards.

Mr Kofi Adams, Member of Parliament for Buem Constituency, said he would work with the MCE as well as the Assembly members towards the development of the Constituency.

Mr Joshua Makubu, the Oti Regional Minister, said the endorsement from the Assembly members was a demonstration of high level of competence as well as in support of what had to be done in the country towards its development.

He admonished the MCE to consider the well-being of the people in whatever she wanted to do.

The Regional Minister told her to take political interest as an additional agenda and not a pre-occupation of what she does in her office as the Chief Executive.

Mr Makubu pleaded with the traditional leaders not to let the Municipality get to a level where their little resources would be spent on MUSEC meetings and fueling security vehicles to “move from here to there.”

He said they should unite and take charge of the Municipality so that “the politician will learn from you and buy into your development agenda so they could build an enviable Municipality in the region.