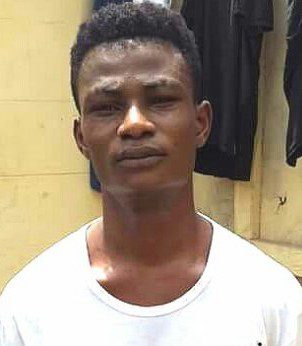 According to him he was given food at 1200 midnight to eat but he declined.

However, the accused said he could not tell how that story came out on social media.

He made the revelation when the court presided over by Mr Stephen Owusu wanted to ascertain the truth about some stories on social media over the alleged food poisoning.

When the court demanded to know how he was being treated by security operatives, Aseidu said the situation had gone from bad to worse. At the lasting sitting Aseidu complained about treatment meted out to him.

According to Asiedu: “I am always inside the cells 24 hours each day. I am not allowed to go out of the cells.”

Asiedu said he is allergic to food made out from corn but anytime he complained nothing was done about it, so he drinks only water.

Mr Augustine Obuor who represented the accused was not present when the matter was called. Counsel had earlier come to the court to wait for his client who was yet to be brought to court.

Prosecution, Superintendent of Police Francis Baah said he was not aware of those developments and assured the court that accused would be catered for well.

Supt Baah explained that there are no spaces for inmates to walk about.

The prosecutor said investigations into the matter are underway.

The court therefore ordered the Police to allow the accused to stroll in the corridors of the cells under guard protection for the sake of his health.

The matter was adjourned to April 19.

Asiedu, who has been charged with murder, is said to have killed the MP in cold blood at his residence in Shiashie, near East Legon on February 8.

His plea has been reserved.

Supt Baah said the deceased, lived with his family in a one- storey building at Shiashie, while Asiedu, a school dropout, lived with his girlfriend at Agbogloshie in Accra.

On February 8, at about 1140 hours, the deceased went to his house with his driver Samuel Berko Sarkodie, he said.

The driver after dropping the deceased handed over the car keys to him and left for his residence at Kasoa.

At about 0100 hours, however, Asiedu armed himself with a catapult, a sharp cutlass and a cutter, and on the blind side of the MP’s security man, entered his residence.

Asiedu picked up a ladder and entered the top floor of the house, where the deceased was sleeping, whilst the security man at post was also fast asleep.

Asiedu on entering the deceased’s room, the deceased woke up from his sleep and held Asiedu.

The Prosecution said Asiedu stabbed the deceased above his breast on his left side, so the deceased then held the knife of Asiedu and shouted for help.

While the deceased was bleeding profusely, Asiedu stabbed him again below the breast on his right side and neck and left him to his fate.

Aseidu then took away two iphones and a tablet of the deceased, and managed to descend from the top to the back of the house and climbed one of the polytanks in the house, skipped the electric fence of the house into an adjoining house and escaped.

The Prosecution said the security man in the house heard the shouts of the deceased for help and he alerted other security men in the area for assistance but no one came to his aid.

Supt Baah said some neighbours, however, got in touch with the Police emergency number but when the Police arrived, the MP had passed on and the body was sent to the Police Hospital where it is awaiting autopsy.

The prosecutor said investigations led to the arrest of the accused who confessed to the crime.

The exhibits retrieved from the accused, among other things, have been forwarded to the Police Forensic Laboratory for analysis.

Supt Baah said the accused also sustained injuries on his left finger and the last finger on his right hand.