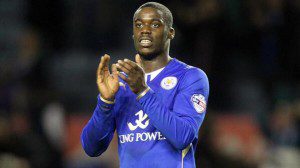 England-based defender Jeff Schlupp wants to return to the Ghana squad for the 2015 Africa Cup of Nations qualifiers after missing the Black Stars 23-man squad for the World Cup in Brazil.

The 21-year-old, who plays for newly-promoted English Premier League side Leicester City, has spoken to Black Stars coach Kwesi Appiah on the upcoming qualifiers.He says he is keen on playing for the Black Stars in the qualifiers for the tournament in Morocco when it starts in September.For Schlupp, his season ended with a call-up to the Ghana national side ahead of the summer?s World Cup in Brazil, but despite winning a second international cap in a friendly against the Netherlands, the German-born just missed out on the final 23-man squad for the finals.?I had a great experience with Ghana and I was in the provisional squad for the World Cup,? Schlupp said reflecting back on his time with the Black Stars before the World Cup.?I didn?t make the tournament unfortunately but it was a great learning curve. There are still many more World Cups to come so hopefully I can make one in my career.?I spoke to the [Ghana] manager a couple of days ago about the African Cup of Nations qualifiers coming up that I could be involved in.?The 21-year-old has been with the Leicester City since the age of 11, and last week put pen-to-paper on a new three-year contract with the club.