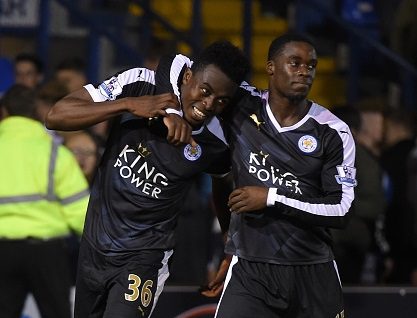 Black Stars wing-half Jeffrey Schlupp has expressed joy for Ghanaian starlet Joe Dodoo who bagged a hat-trick for Leicester City in their 4-1 thrashing of Bury in the Capital One Cup on Tuesday.

The 19-year-old Academy graduate, who bagged over ten goals for Leicester?s U21 side last season, fired the Premier League side in front in the 25th minute before scoring in the 86th and 90th minutes to seal the win.

A quick and powerful attacker, Dodoo has been one of a number of standout performers in City?s talented Under-21s group and Italian gaffer Claudio Ranieri handed him a big debut by starting him in attack at the Gigg Lane.

Black Stars player Schlupp stepped out of the dug-out in the second-half to help Dodoo complete his hat-trick as he assisted his third goal and the Hamburg-born is thrilled with the young attacker?s show on the night.

So happy for my brother Joe Dodoo!! Hattrick on his debut for @LCFC doesn?t get better than that! ?? pic.twitter.com/a6FV7z352g