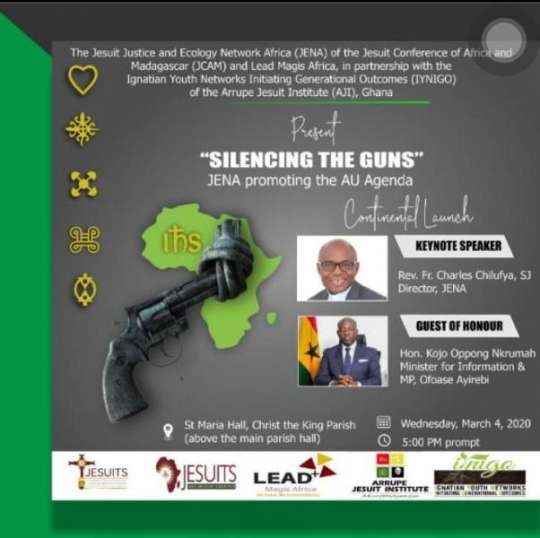 The Jesuit Justice and Ecology Network Africa (JENA) will launch “Silencing the Guns” campaign in Accra on Wednesday, March 4, to enforce a just, poverty-free, peaceful, and ecologically regenerative Ghana and Africa

The project is targeted at getting rid of illegally acquired weapons in Ghana and Africa as well as promote prevention, management and resolution of conflicts in Africa as part of African Union Agenda 2063, Madam Scholastica Barimah, Assisting Coordinator, IYNIGO told the Ghana News Agency in an interview in Accra on Friday.

She said JENA is working in partnership with the Ignatian Youth Networks Initiating Generational Outcomes (IYNIGO), to preach peace as Ghana prepares for Elections 2020.

Madam Barimah said the AU Heads of State and Government in 2013 adopted the Silencing the Guns by 2020 initiative as a flagship project that aims to end all conflicts in Africa by 2020.

She said the AU initiative was intended to achieve a conflict-free Africa, prevent genocide, make peace a reality for all and rid the continent of wars, violent conflicts, human rights violations, and humanitarian disasters.

Since 2014, Africa has made progress in the quest for peace and security, mostly by strengthening continental response frameworks and institutions, as well as by working with the United Nations and other organisations on the ground.

Over the past two decades, the guns have been silenced in previous hotspots such as Angola, Côte d’Ivoire, Liberia and Sierra Leone.

Madam Barimah said significant strides have been made in difficult cases such as Somalia and Sudan, according to the Addis Ababa-based Institute for Security Studies (ISS), and peace-building initiatives on the continent have also helped quell many potential flare-ups.

JENA operates under the aegis of the Justice and Ecology Office of the Jesuit Conference of Africa and Madagascar (JCAM).