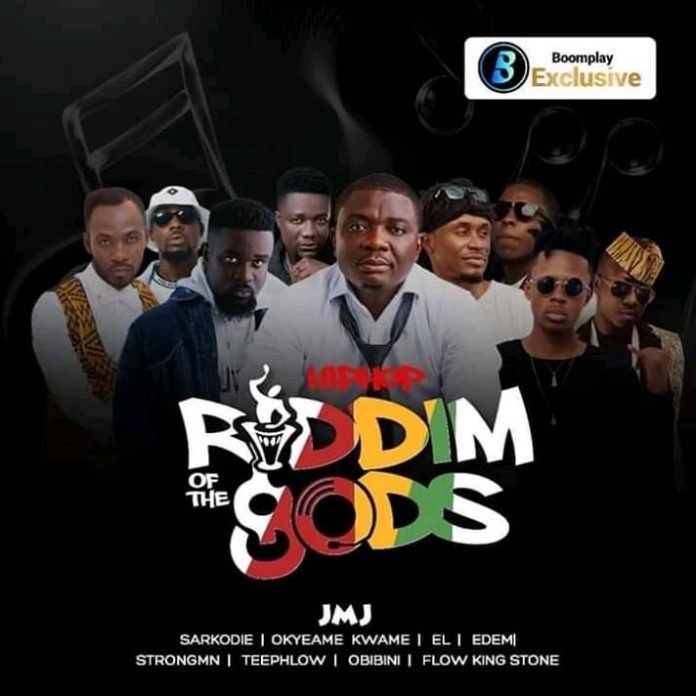 Renowned Producer JMJ just hit the N.o 1 spot on Boomplay Music Ghana with his debut album from “Riddim Of The GODS”

He crept to the top of Boomplay Music Chart with 8 songs from the Hiphop album on the 5-genre project.

And all these was achieved in less than amidst several heavy trending materials on the showbiz front; but JMJ and Boomplay were able to literally hijack music lovers’ attention the whole week.

The Rappers listed on the Hiphop project must be highly commended for their class and powerful lyrics and melody they fed on their respective records; making it very hard to arrive at a one top ‘winner’.

Though it wasn’t a competition among the artistes for some award or prize, the PR Campaign for the project was extreme and well calculated it felt like a sporting competition with fans of respective artistes and pundits keenly involved. 2 songs were released each day from Monday, December 9, 2019 to Thursday, December 12, 2019 – which listed Rappers Sarkodie, E.L, Teephlow, Strongman, Edem, Okyeame Kwame, Obibini & Flowking Stone, chronologically in order of releases from Boomplay Music Ghana.

At least 9 consistent radio engagements was done for the project within 5 days and it was so scintillating.

It was so exciting that fans of other Rappers who couldn’t get listed are calling for a Part 2 of the Hiphop Album.

“Riddim Of The GODS” would become a yearly project, according to Elorm Beenie who is the lead PR for the project and Publicist for award-winning Producer, JMJ.

Boomplay Music indeed also deserves some accolades for being able to partner JMJ on this initiative and actually get fans patronizing their platform and supporting local content, which perhaps has never happened in Ghanaian history before.

10 years ago he dropped the first ever Riddim Album recorded in African history (Trigger Riddim – Ghetto KB, Samini, Mugeez, Zionite, Iwan, etc). Then he came through with the ever popular “Missile Riddim” which featured Samini, Kofi Kinaata, E.L, Stonebwoy, Kaakie, Ruff n Snooth, just to name a few – and then “Xtra Large Riddim” with Kaakie, Ghetto KB, Samini, etc. A decade later he returns to give us a more refined and well-packaged riddim project like this, called “Riddim Of The GODS” – and henceforth would be an annual project from JMJ, born Joshua Raphaelson.

Mr. President Even Your Much Loved Kalypo is Now Expensive