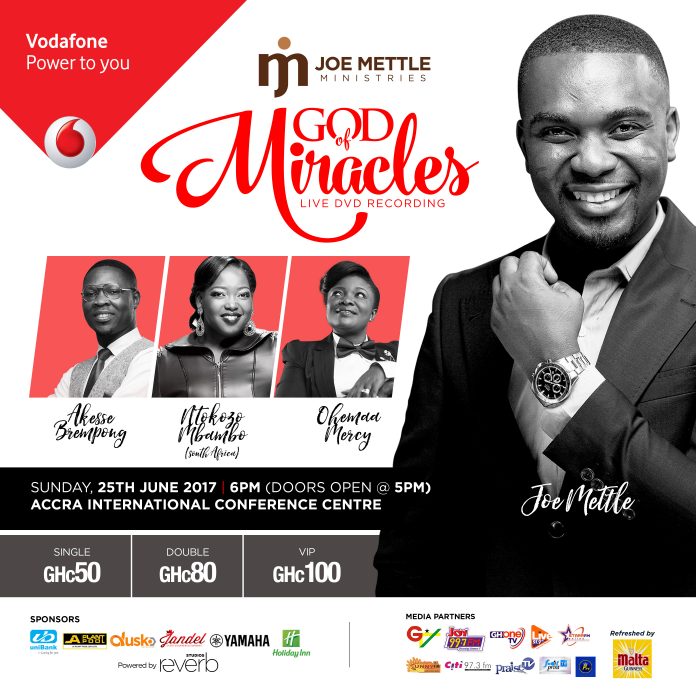 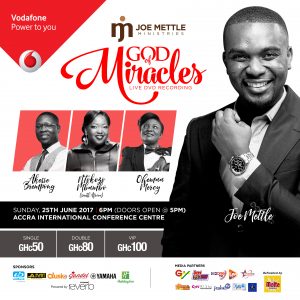 Ghana’s reigning Vodafone Ghana Music Awards Artiste of the Year, Joe Mettle is set to record his next live album at his Praiz Reloaded Concert which will be held at the Accra international Conference Centre on Sunday 25th June 2017.

Barely two weeks after being crowned the Artiste of Excellence, West Africa, at the just ended African Gospel Music and Media Awards in the UK, Joe Mettle is ready to record his next live album. The live DVD recording will feature, some gospel artistes including Ohemaa Mercy, Ntokozo Mbambo, Akesse Brempong, Luigi Maclean, and the Lovegift band among others. Praiz Reloaded is in its 6th successful year running and attracts audiences from the West African sub region, USA, Canada, UK and across the world. The gospel sensation is expected to thrill patrons with a great time of worship and praise filled with miracles and testimonies of God’s goodness. Joe’s next album which is dubbed ‘God of Miracles’ is expected to be released in October this year. All songs on the album have deeply inspired lyrics and sits on a variety of local and contemporary grooves.

The Praiz Reloaded Concert is lead sponsored by Vodafone. Tickets are available at all Vodafone retail shops in Accra and Tema. Other sponsors include, Unibank Ghana, JA PlandtPool, Dusk Capital, Jandel Ltd, Yamaha and Holiday Inn.

Ghana 2023: LOC to outdoor logo, mascot and website on December 16