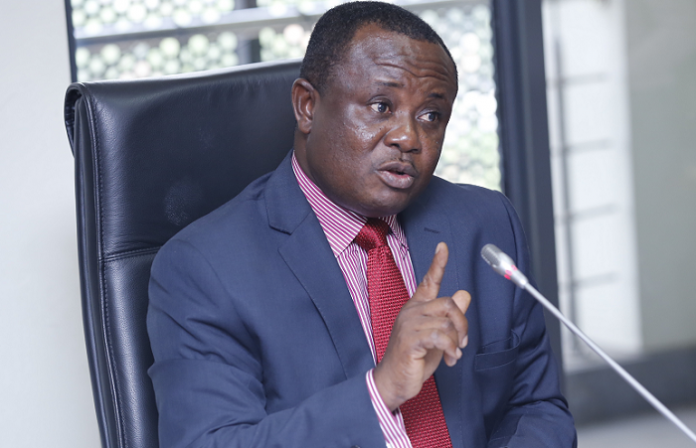 Mr Joe Osei-Wusu,First Deputy Speaker and Chairman of the Appointments Committee of Parliament on Wednesday appeared before the special committee to conduct an inquiry into allegations of collecting bribe against him and the Minority members on the committee. He repeated his earlier position that he never took any money from Energy Minister Boakye Agyarko, to be given to the Minority members on the committee to influence his approval for the position.

He informed the five-member committee, chaired by Mr Joe Ghartey, MP for Essikado Ketan and former Deputy Speaker of Parliament in Accra, that the allegation according to Mr Samuel Okudzeto Ablakwa, MP for North Tongu, was to equalise and spread allegations of corruption against former President John Dramani Mahama and for the Majority New Patriotic Party (NPP) to feel the heat of making allegations against the former president.

The bribery allegation followed the reluctance by the Minority side of the Appointments Committee to recommend Mr Agyarko for passage over certain comments he made against former President Mahama during his vetting.

According to the witness, Mr Ablakwa’s statement was made at a conclave meeting at the Speaker’s Lobby, to consider issues and reach consensus on approving Mr Yaw Osafo-Maafo, then Senior Minister Designate and Mr Boakye Agyarko, then Energy Minister Designate, on whom the Committee had recommended majority approval rather than consensual.

Mr Osei-Owusu and Minority Chief Whip Mohammed Muntaka were implicated in an allegation that they received GHC100, 000 to share GHC 3,000.00 each from Mr Agyarko as bribe money for his approval.

The narrative has been contested by Messrs Osei-Owusu and Muntaka who both denied receiving and sharing money to the MPs and accused Mr Ayariga of peddling falsehood.

Mr Osei- Owusu, said he was infuriated and became emotional at the statement, but the evoked laughter among members and a number of the members on the Minority Side at the conclave meeting urged him to cool down.“From Monday it was difficult for me to look at people’s faces,” he said, adding “Friends took photo of me to show me…I was truly not myself.”

Not knowing whether the statement was a joke or a serious, Mr Osei-Owusu said he reported it when he lodged a formal complaint at plenary on the bribery scandal levelled against him in the media by Mr Mahama Ayariga, MP for Bawku Central.

While lodging the complaint, Mr Osei-Owusu threatened to go to court to redeem his image, but the Speaker Professor Michael Ocquaye, directed that the special committee, to be chaired by Mr Ghartey, set up to investigate it.

Mr Ayariga and two other colleague MPs, Samuel Okudzeto Ablakwa and Alhassan Suhuyini subsequently petitioned the Speaker to probe the matter since they insisted there was an attempted bribery.

Mr Osei-Owusu refuted allegations from Mr Ablakwa, Mahama Ayariga; and Alhassan Suhuyini, MP for Tamale North claims that some monies were paid to them after the vetting of Energy Minister Boakye Agyarko to influence Mr Boakye Agyarko’s approval.

He explained that the three Minority MPs fabricated the allegations, and that Ablakwa repeated that confession later in the presence of Mr K T Hammond, MP Adansi Asokwa.

Mr Ghartey, in a preliminary statement, before the submission of Mr Osei-Owusu justified the setting up of the committee and its jurisdiction, against public outcry of conflict of interest by the committee.

By the rules of the House, Mr Osei-Owusu, would have to chair the Privileges Committee if the matter had been referred to it.

Mr Ghartey explained that he did not see any conflict of interest and that the committee was established under Order 191 of the Standing Orders of Parliament which gives the House the power to appoint a special or ad-hoc committee to investigate any matter of public importance.

“We derive our power from Article 103 (3) of the Constitution, which states that committees of Parliament shall be charged with such functions including the investigation or enquiry into activities of the administration of ministries and departments of Parliament as they may determine etc.,” Mr Ghartey said, adding that “the only way we can stop our work is when Parliament itself stops us.”

“I’m a public officer as a Member of Parliament, unfortunately I don’t agree with those who think that my sitting as chairman poses a conflict of interest. I will therefore not recuse myself.”

Mr Ghartey stated further: “Let me also remind you that in exercising our power, we have all the powers of a High Court or a Justice of the High Court at a trial but only in respect of enforcing the attendance of witnesses and examining them on oath… and compelling the production of documents or request to examine a witness abroad.”

The members of the committee are; Mr Ben Abdallah Banda, the MP for Offinso South; Ama Pomaah Boateng, MP for Juaben, now on assignment at the ECOWAS Parliament in Abuja, who was replaced with Abena Dorowah Mensah, MP for Assin North, Mr B T Baba, MP for Talensi, and Mr Magnus Kofi Amoatey, MP for Yilo Krobo.