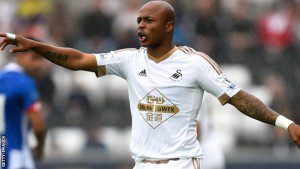 English Football writer John Cross has described the transfer of Ghana wing attacker Jordan Ayew from french Ligue 1 side Olymique Marseille to English Premier League side Swansea City as ?clever and shrewd? in the transfer history of the club.

John Cross who is the Chief Football Writer for the Daily Mirror believes that the Ghanaian international has lighted the English Premier League with his magnificent performances fetching three goals and two assists in the four matches played so far.

?He joined on a free. It typifies Swansea?s clever and shrewd business in the transfer market. The Ghanian midfielder scored one and made one. He?s a terrific player, full of energy, ideas and has a goal threat?, Cross described Andre Ayew in the Daily Mirror.

Cross added that Andre has added value and business to the Swansea City set up by providing the Premier League side with the right option when they were looking for a player to augment the side.

?He?s improved Swansea and for good value and business, there have been few better deals incoming into the Premier League during the summer window. So far, of course?,Cross added.

Andre Ayew scored in his first two games for the Whales based side fetching the equalizer for Swansea City in his debut game against defending champions Chelsea and and scoring his second in a 2-0 win over Newcastle United.

The Ghanaian again lived up to the hype after scoring against Manchetser United to cancel Juan Mata?s opening goal and setting up Befetimbi Gomis with a nicely orchestrated pass from the outside of his foot to make it 2-1 against United.