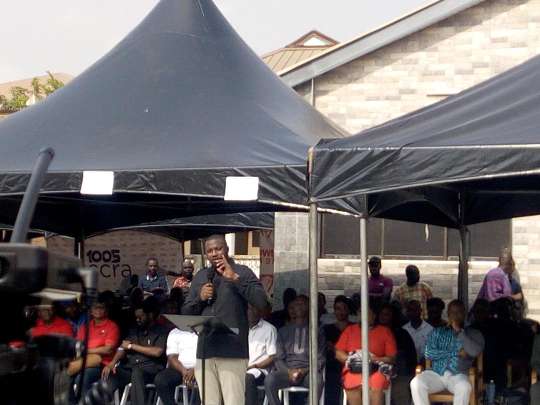 Mr John Dumelo, the National Democratic Congress (NDC) parliamentary candidate for Ayawaso West Wuogon in the 2020 General elections, has shamed perpetrators of the ‘bloody’ violence which took place a year ago in the constituency.

He said this in his remarks at a ceremony held in Accra to commemorate the one year anniversary of the Ayawaso-Wougon by-election violence on the theme “Enough is Enough”.

The event was attended by members of the NDC, traditional leaders and sympathizers of the unfortunate incidence.
He said it was unfortunate for such violence to have been perpetrated in such a democratic dispensation, which disenfranchised innocent citizens and injured a lot more people who came out that morning to cast their ballots.
“Some people wanted to win power at all cost.”

He said he would win the seat come December 7, 2020 and would not come to power through bloodshed and violence.
Traditional leaders of La Bawaleshie performed a special libation ritual with water and Dry Gin to cleanse the land of such unfortunate incidence and also called on their ancestors to preserve the peace and tranquility that existed in the area.

The Ayawaso West Wougon by-election was to elect a member of parliament after the death of the sitting Member of Parliament Mr Emmanuel Kyeremanteng Agyarko, but was suddenly disrupted by a group of uniformed men from the National Security, which ended in violence and bloodshed on January 31, 2019.