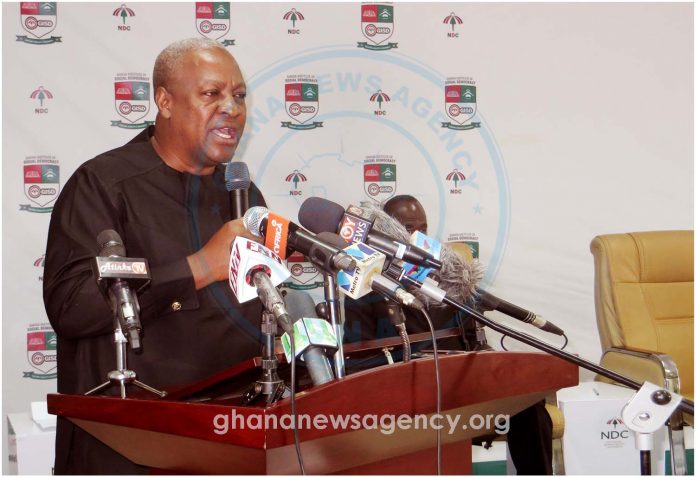 Former President John Dramani Mahama says nationalism and patriotism have become deficient in Ghana today.
“Absolutely, nobody thinks about the country first. We all think about ourselves first, our families second, our parties third may be, our communities fourth and Ghana comes about a distance fifth or sixth or event 10th, ” he stated on Friday in Accra at the induction of the first batch of students of the Ghana Institute of Social Democracy (GISD), a party school of the National Democratic Congress (NDC).
The GISD courses outlined in this module include Political Leadership; Party Organisation and Political Activism, the History of the NDC, the Philosophy, Principles and Practice of Social Democracy.
Former President Mahama said the GISD was a very useful institute; and that it was going to be a source of knowledge, not only for party cadres but for people who had the ideological orientation of social democracy to gain ideas of leadership, nationalism and patriotism.
“And so if this Institute not only trains cadres for the Party to let them understand the ideological underpinnings of the NDC; because in 2002, we adopted Social Democracy as our Party’s philosophy,” he said.
“And yet if we ask Party cadres all over the country what social democracy is? We will get different interpretations of what social democracy is. And in many cases most of our people are ignorant reading what it is. And so we find that developing in the Party tendencies that are not borne out by social democracy.”
He cited some of the tendencies as self-interest, parochialism, lack of unity, divisiveness, undermining colleagues and cadres.
Former President Mahama said these were the kinds of things that understanding the ideological underpinnings of a party would help us avoid.
He encouraged the Party cadres and the youth to take advantage of these courses and partake in the Party’s leadership training programme.
He also urged the NDC to contract the GISD to organise short term courses for the Party cadres and the youth at the regional level to teach them party youth activism and the underpinnings of social democracy.
He said establishing the GISD was a very useful investment, which the Party had ventured into; and he fully appreciated it.
Former President Mahama said the GISD was not the first attempt to set up a Party school or an ideological training institute in Ghana.
“For those of you who are very young to remember, you probably might have heard of the ideological institute that was based in Winneba, which was set up by the first administration under Osagyefo Dr Kwame Nkrumah to provide ideological training in socialism and also training in nationalism and patriotism for party cadres and other young professionals,” he said.
He said the Kwame Nkrumah Ideological Institute was not restricted only to party cadres, and that they had several people who were not party cadres, who had the opportunity to attend the Ideological Institute in Winneba.
He said there was an attempt by 1988 during the revolutionary era to establish a party school, which been shelved over the past 25 years.
Former President Mahama said contrary to the widespread perception, institutes like the GISD were not institutes for indoctrinating people.
“The perception in the First Republic when the Ideological Institute was set up, was that it was a place where people were sent to be brainwashed to become ideological robots of the governing party,” he said.
“But that is not the case, if you look at the curricular of the Ideological Institute it contains programmes of leadership, how to live in communities; of course it contains programmes of party activism but it also contains community programmes of community self-help, it contains programmes of nationalism and patriotism,” he added.
Mr Johnson Asiedu Nketiah, the General Secretary of the NDC, said leadership was the deciding factor of failure or success in every endeavour; declaring that everything begins and ends with leadership.
Mr Lee Ocran, first National Vice Chairman/Acting National Chairman of the NDC said since the adoption of the social democratic philosophy by the NDC in 2002, there had been an urge to train its people it the social democratic philosophy.
“You cannot build a social democratic party with democrats. And democrats just don’t just appear they have to be trained,” he said.
Professor William Ahadze, Acting Rector, GISD, and the NDC’s Director of Research said the Institute would contribute to transform the NDC into a more formidable party.
He said the establishment of the Institute marks the genesis of the NDC’s return to power in the next general election in 2020.
In attendance at the induction service were former Vice President Paa Kwesi Bekoe Amissah-Arthur and Mr Julius Debrah, former Chief of Staff.
GNA