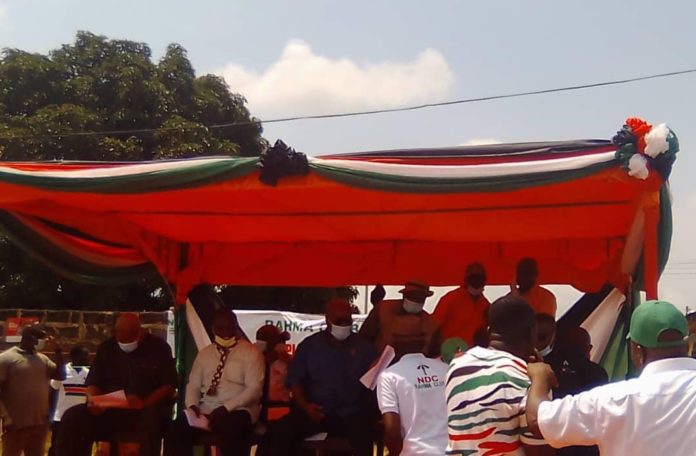 Former President John Dramani Mahama, received a rousing welcome at the Koforidua Zongo on Saturday, when he addressed a mini-rally as part of a four-day campaign tour of the Eastern Region.

Hundreds of party faithful and supporters in party paraphernalia mobbed the former President as he made his way to the rally grounds.

President Mahama, addressing the people of the Koforidua Zongo said that he would provide a community day SHS a Koforidua Zongo as part of plans to abolish the double-track system and improve access to secondary education.

He said the NDCs people manifesto for the 2020 elections, had made provisions to enhance the free SHS policy to be better and accessible to all Ghanaian children, whether in the public or private school.

The NDC flagbearer also indicated that the NDC when voted back to power would institutionalize Islamic Education Units across the country to play roles in the education of the Islamic community, just as the Methodist, Presbyterian, and the Catholic education units, among others.

Mr Samuel Ofosu-Ampofo, National Chairman of the NDC, said the NDC had better policies in the people’s manifesto for the youth’s development and enhancement and urged the Zongo youth to vote massively for the NDC to come back to power.

He appealed to the youth not to accept any inducement in the form of money or freebies to vote for the NPP adding that “any youth who votes for the NPP is endangering his or her future”.

Alhaji Mohamed Nurudeen, spokesperson of the Zongo chiefs and Imam, said former President Mahama had passed the test of building infrastructure for a sustainable development and assured him of massive votes from the Zongo, come December 7.