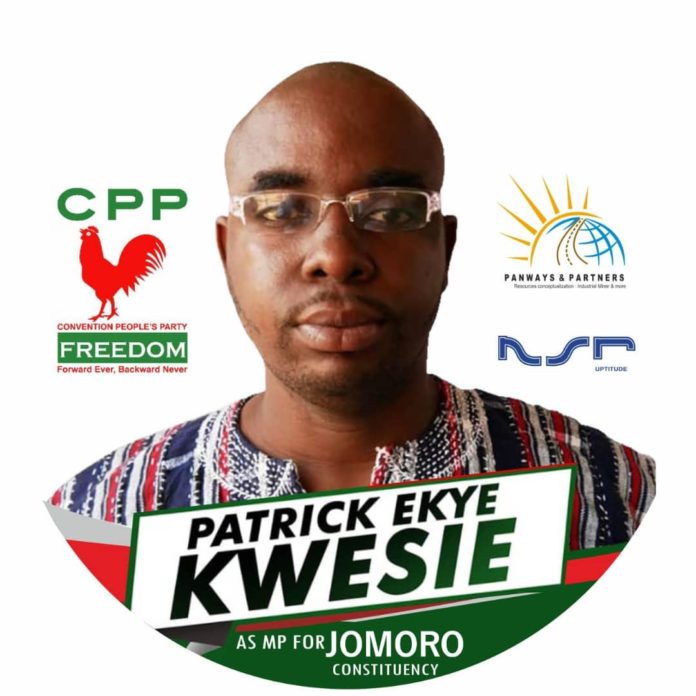 Mr Patrick Ekye Kwesie, the Convention People’s Party ( CPP) Parliamentary Candidate for Jomoro, has outlined tentative social intervention policies to improve the living condítions of the people when voted into power in the December elections.

He noted that Jomoro abounds in both human and natural resources which remained untapped leaving indigenes impoverished and the area backward in development.

Mr Kwesie who claimed he had undertaken an action research activity on the resource base in the constituency, was confident that prudent tapping and management of resources would inure to the development of the area.

The Jomoro CPP Parliamentary Candidate outlined his vision in an interview with the Ghana News Agency ( GNA) in Takoradi.

Mr Kwesie said under his leadership, he would support the establishment of a chocolate and confectionery factory at Cocotown-Ghana-Nungua close to the border with La Cote D’Ivoire.

He said he would lobby for a glass factory utilísing silica sand to be set up at Jaway.

On Education, the CPP Candidate would organize trainer of trainer programmes for teachers and encourage exchange and volunteer programmes with Europe.

He hinted that he will lobby for the setting up of an oil and gas Technical Training school at Bawia to train the required manpower for the oil and gas industry.

Still, on Education, a College of Education would be set up at Half-Assini behind the Senior High School with quasi health college attached.

Mr Kwesie also hinted at the setting up of the Jomoro Focus Fund with priority to Education, Health, Hydro-Carbon, Tourism, and affordable housing with local materials.

He would also encourage inland drilling, especially around the Bonyere enclave to witness an unprecedented development.

A plant for Isopentane which would generate power would be established to offer employment to the youth.

Touching on Agriculture, Mr Kwesie said the CPP would venture into Chilli pepper production for export.

Domestic tourism would be given a boost by linking the Benyin-Nzulezo, Wharf market, Ankasa forest among others to the development fund, adding that a further development of the Jaway and Newtown wharf would boost economic activities.

Under healthcare delivery, he said t dialysis machine would be procured for the Half-Assini government hospital.

Capacity building would take a center stage and encourage the set up of the Jomoro Chamber of Commerce mainly on Agriculture, Hydro-Carbons, Healthcare improvement, social interventions, and emergencies.

The CPP aspirant said he was bent on investing in traditional authorities to restore the trust ín appointed officials in Jomoro.

The Annor Adjaye II Airstrip would be established in the Northern part of Tikobo No.2 to serve the petro-chemical Industry in terms of small aircraft with expansion motives to accommodate large aircraft.

Mr Kwesie said above all, “wealth creation and livelihood improvement through sustainable development funding from my foundation”, would be his major pre-occupation.