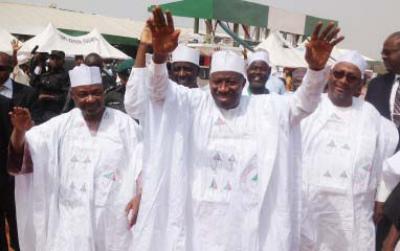 President Goodluck Jonathan on Friday turned down a unanimous request by the Peoples Democratic Party (PDP) governors in the south-east geopolitical zone to declare for the 2015 presidential election. He said that he would reply them later.

The governors had, during the ?South-east Unity Rally? of the PDP yesterday in Enugu, urged President Jonathan to, as a matter of urgency, declare his intention to run for president come 2015.

But while responding to their request, President Jonathan said they were in Enugu for a unity rally for the south-east zone and that though they made the request, he would reply them later.

?Chairman of the Governors? Forum spoke, other governors spoke and of course they have asked me a question, the answer of which will come later,? he said.

He thanked loyalists of the ruling party in the south-east for their commitment to and support for his administration, pointing out that from the number of people that attended the rally, he needed nobody to tell him that the south-east was PDP.

The No. 1 citizen of the country used the opportunity to state that they have been magnanimous, and that ?from today onwards? the PDP would take over all the south-east.

Jonathan described the PDP as the only democratic party in the country that can take Nigerians to the rest of the democratic world, adding that it is only the PDP that can salvage Nigeria.

According to him, other political parties can never take Nigeria to the democratic world, urging Nigerians to embrace the ruling party even as he insisted that there is no rival party in Nigeria.

He commended the south-east geopolitical zone for what he described as the minimal security challenges in the zone, saying the development was occasioned by their resolve that Nigeria must move forward.

Africanists Asked To Take Ownership And Control Over Their Destiny