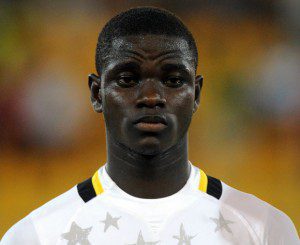 Ghana’s Jonathan Mensah says he is relieved to have seen out his four-month ban from all football activity by world football governing body FIFA.

The center back was slapped with the ban after he moved from Udinese in Italy to Evian in France at a time when he was still under contract with the Italians.

The ban ended at midnight on Monday and the Ghana international is delighted to be back.

“I feel good, I feel very happy to be back. I thank God for giving me the strength and courage to be able to go through this very hard times”, he told TV3 Sports.

Mensah says he has been training on his own since the ban and believes he will be back to his best for both club and country.

“I have been training very hard. I have not been playing games but I have to play my games in the gyms and on the training pitches but ultimately I am happy to be back playing again. I thank my family, everyone that helped me, my team as well. Fitness wise, I feel very okay”, he said.

Mensah, a regular with the Black Stars had looked set to switch clubs in the summer before the ban came into effect, scuppering all those plans in the process. He is now prepared to bid his time and wait for the right opportunity.

He said: “For now, I am still with my team, Evian and hopefully when the window opens something good will come up. Because due to this suspension I couldn’t move. I have served my term and I have learnt a lot from it so I have to be patient, keep working hard so I can see what the next stop will be.”

The former Ashanti Gold star says there are major lessons in his ban for all Ghanaian footballers. “I’ll just say that whatever you are into, just stay in it and appreciate it. It was hard for me from the beginning but I worked my way through so I am just happy this thing is all over”.