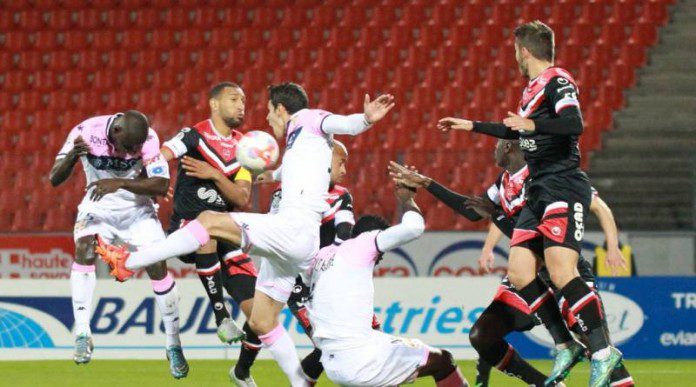 Mensah (left) shows his defensive capabilities in the match

Ghana defender Jonathan Mensah is delighted to return to action and has thanked his Evian team-mates for the support they offered him when he was serving a four-month ban.

The centre-back made a successful return to action on Friday night after the four-month FIFA ban and helped his French second tier side to an emphatic 4-0 victory Valenciennes.

The powerful centre-back played the entire duration of the game as they romped to the important victory that will spark their hopes of returning to the top-flight.

Mensah played the game without showing any signs of four months on the sidelines as he was very combative by repelling the strikers of Valenciennes.

“It feels good to play again, especially when there is victory at the end. It was very important to win tonight, because the previous matches have not gone well,” Jonathan Mensah said after Friday night’s game.

“I felt very good on the pitch. I thank the entire group, because everyone supported me well. I am fit and thanks to them. We will continue to win games and we will do well to improve on the league table.”

The centre-back returned to competitive football on Friday after serving a four-month ban slapped on him by football’s world governing body FIFA.

The France-based player ended the ban last week Monday which made him available both his club Evian and the Ghana national team.

The Black Stars player centre-back was handed the four-month ban in April over his transfer move to Evian Thonon Gaillard in 2011.

The Court of Arbitration for Sport (CAS) upheld the matter in favour of Mensah’s former club Udinese who claimed the player was poached by French club Evian without the necessary transfer clearance.

The Ghana defender joined Evian as a free agent but investigations by FIFA and the Court of Arbitration for Sports (CAS) revealed that Mensah’s contract with Udinese by then had not run out.

Mensah was suspended from football for four months starting on April 29, 2015 but the summer break halted the suspension.

The suspension resumed in late August when the new season started and with two months already in, Mensah has ended the ban.

Evian were fined €1 million which was paid as compensation to Udinese and a possible two years ban from the transfer market.

Mensah’s Evian were relegated from the French Ligue 1 at the end of last season and he will play in the second tier but is likely to leave in the winter transfer season with several top-flight clubs keen on him.