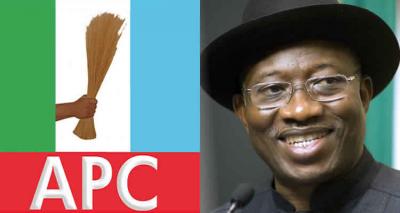 By Augustine Aminu
The All Progressives Congress Presidential Campaign Organisation (APCPCO) has accused the President Goodluck Jonathan administration of massive corruption in the country?s agricultural sector.
“President Jonathan has failed woefully in the agricultural sector, and all the self-praise of the administration on agriculture is simply a ruse,” the APCPCO said in a statement released on Sunday, February 1.
The statement, signed by Mallam Garba Shehu, pointed out that whereas President Jonathan had promised in 2010 to make Nigeria self-sufficient in rice and wheat production by 2015, ?the grim reality on the ground today is that Nigeria emerged as the world?s highest importer of rice in 2015, and a whopping $11 billion is spent annually by Nigeria to import rice, wheat, sugar and fish.?
The statement added that according to the former Acting Governor of the Central Bank of Nigeria, Dr. Sarah Alade, Nigeria as at 2014 spends $4 billion on rice importation ? that is about N600 billion annually on the importation of 2.1 million metric tonnes of milled rice.
?This is after the Federal Government had approached the China Exim Bank for a loan of $1.2 billion for the financing of 100 large-scale rice processing plants with a total capacity of 2.1 million metric tonnes.
?The troubling truth today, is that Nigeria is nothing close to self-sufficiency in rice production and what we have at hand is a close web of corruption where government cronies stumble over each other to get import licenses for rice.?
The statement also noted that a similar unacceptable situation pertained to the importation of wheat.
?According to the Minister of Agriculture and Rural Development, Dr. Akinwunmi Adesina, Nigeria?s wheat consumption as at year 2000 was about two million metric tonnes. But, by 2010, wheat importation to the country had risen to four million metric tonnes and Nigeria spends N635 billion annually on wheat importation.
?Five years into the Jonathan?s administration, Nigeria spends even more than we did in 2010 to import wheat; yet the government continues to brandish false achievements in the agricultural sector ? a situation that is completely at variance with what President Jonathan promised Nigerians in 2010, saying that his government would make Nigeria save N635 billion annually on rice and wheat importation.?
On fertilizer accessibility to farmers, the APCPCO faulted the claim by government that local farmers now have unhindered access to fertilizer through the Growth Enhancement Scheme.
On the contrary, Shehu says that what gets to each farmer under the e-wallet arrangement, which he described as, ?excessively labourious and technically difficult for the farmers to work through? are two bags of fertilizer throughout the entire farming season, ?and government has not come out in one instance to tell Nigerians how much it receives as grants on fertilizer distribution to farmers from donor agencies.?
?The government will want to give us the impression that fertilizer is being given to farmers free of charge. But we know that what subsists is a 50 per cent subsidy per bag of fertilizer. Our farmers are being shortchanged under this so-called e-wallet arrangement because of lack of transparency.
?We may be looking at another subsidy scam over fertilizer unless the Jonathan administration comes out clean to tell us how much it has received as grants over fertilizer and how it comes about the 50 per cent subsidy per bag of fertilizer,? Shehu said.
The statement dismissed President Jonathan’s claims of achievement in the agricultural sector, pointing out that ?throughout the periods preceding the Jonathan?s administration, the contribution of agriculture to the Gross Domestic Product (GDP) was at 7 per cent, while under the so-called transformation agenda of President Jonathan, agriculture?s contribution to the GDP has been consistent at 5 per cent ? an all time low.
?In any case, food commodities are items Nigerians buy on a daily basis. If the Jonathan administration was sincere with the statistics it reels out on agriculture, why would the government buy pages of newspaper advertorials and TV commercials to force bitter falsehood of its achievements down the throats of Nigerians? The Jonathan administration has failed woefully in its agricultural policies and the facts are self-evident out there at those food stalls in our markets.
“In 2015, Nigerians know they spend far more to buy food than they did in 2010. That reality, in itself, is President Jonathan’s scorecard in agriculture,? the APCPCO concluded.