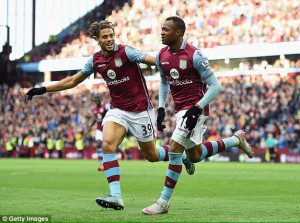 The striker joined Villa from French side Lorient in a wallet-thumping move which brought expectation for him hitting the ground running.

However he did not score for two months since joining the club which sparked some doubts about his potential.

Ayew finally scored his first goal on Saturday when his side Aston Villa were beaten 2-1 by Swansea City.

He nodded in the opener but his brother Andre’s club managed to come from the goal down to win the match with the latter scoring the winner.

So here’s the sequence:

Brad Guzan makes a brilliant save on Andre Ayew’s 1-on-1 chance. Ball goes out for a corner.

Swansea takes the corner SO QUICKLY.