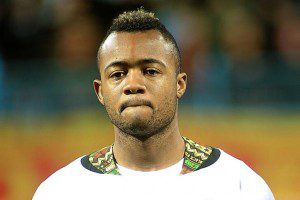 Jordan Ayew has received enquiries from six Premier League clubsThe Lorient forward is available for around ?5million summerBrother Andre signed a four-year deal with Swansea on a free transfer Ghana striker Jordan Ayew is ready to follow his brother to the Premier League this summer.

The Lorient forward has had enquiries from six Premier League sides and is available for ?5million. Ayew scored 13 goals for Lorient last season and one for Ghana in their Africa Cup of Natios tie against Equitorial Guinea.

He played in the World Cup last summer and scored a hat-trick in Ghana?s final warm-up match against South Korea after coming on as a substitute.

His British representative Mark McKay said: ?Jordan has age and talent on his side. He?s a versatile forward who is quick and gets goals. I took Diafra Sakho to West Ham last season and I rate Jordan in the same bracket. He can have a big impact in England.? The 23-year-old, who is rated in same bracket as Diafra Sakho, has been valued at ?5 million

Swansea fought off competition from West Ham and reported interest from Liverpool, AC Milan, Roma and Bayer Leverkusen to land Jordan?s brother Andre, whose father, Abedi Pele, is considered one of the greatest African players of all time.

He scored 10 goals for Marseille last season as they finished fourth in Ligue 1. During his time in France, he won the League Cup twice.

The midfielder spoke of his delight at completing his move to the Premier League outfit. Jordan?s brother Andre has signed a four-year deal with Swansea on a free transfer from Marseille

He told the Swansea website: ?The project that the club has for the future is very exciting, and when I spoke to the chairman and manager I felt this was the right place for me.

?I felt that my desire to play in the Premier League and wanting to grow as a player meant that Swansea was the best solution for me in every way.

?Seeing the honesty and desire of the club made me feel that they really wanted me to come. They have proved that in all ways.?