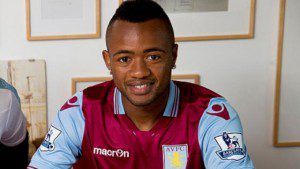 Ghana and Aston Villa striker Jordan Ayew will be hoping to guide his side to a victory against Arsenal after being named in the starting lineup.

The former Lorient striker is the Villa’s highest scorer with 3 goals and will be hoping to add to his tally against Arsene Wengers side this afternoon.