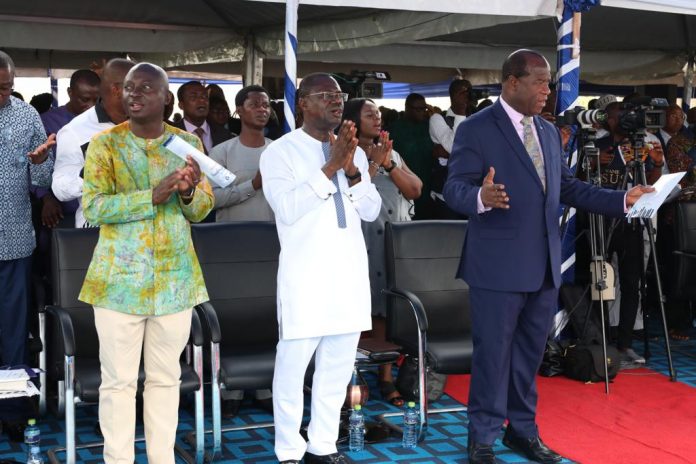 Dr Joseph Siaw Agyapong, Executive Chairman of the Jospong Group of Companies and the entire staff body together with stakeholders in the waste management sector converged at the firm’s headquarters in Accra for the 2019 Annual Thanksgiving Service.

The event which is held every year by the Jospong Group to express their profound gratitude to God for an impactful business year and continual sustenance of the firm was held under the theme ‘Because of the Lord’s great love, we are not consumed – Lamentations 3:22’.

In an atmosphere of reverence to God for diverse benefits, Rev Sam Korankye Ankrah cautioned against the tendency to take credit for the intervention of God in our dealings when success becomes the norm.

“It is a good thing to give thanks to God and hence the move to hold this event by the Jospong Group is highly commendable. Ensure that you make thanksgiving a daily lifestyle.

“Worship and thanksgiving to God does not only sustain the benefits we derive from the goodness of God, but multiply our blessings. Never ever forget to approach God with a heart of thanksgiving for the successes chalked by this great company over the years,” Rev Korankye Ankrah said.

Joseph Siaw Agyapong overwhelmed by emotions over what he believes was as a twist of fate in the establishment of Zoomlion; recounted how his original motive was to set up a printing press but ended up with a waste management giant, which is now solving sanitation problems in Ghana and other African countries.

“I took a loan of GHC30,000.00 from Barclays Bank at the time Alhassan Andani was working Barclays, so he helped me to secure the loan. Then when I got to China and saw tricycles …God dropped an idea in my heart to purchase those vehicles instead of the printing machines.

“I started off very small by leasing the vehicles out to DCE’s across districts in the Ashanti region at the start of the project, but look at what God has done today. Jospong is now the leader in waste management in this blessed country and beyond,” he said.

The Minister of Works and Housing, Mr Samuel Atta Kyea who was present at the event advised against ill-treatment of individuals who is deemed to be at the lover ladder in society.

He admonished individuals to respect all manner of people bearing in mind that one’s subordinate could turn to be his superior in the future.

PURC resolves 3,254 complaints in Bono, Bono East and Ahafo since 2019

Ghana Re-affirms Position to Leave No One Digitally Behind

The Future of Finance: Regulatory insights from two Fintech reports