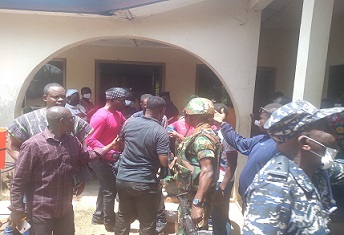 Six Journalists were on Tuesday allegedly assaulted and prevented from performing their duties at Atebubu in the Atebubu-Amantin Municipality of the Bono East Region.

The journalists were at the precincts of the Municipal Assembly Hall to give coverage to the voting for the confirmation or otherwise of Mr. Edward Owusu, President Nana Addo Dankwa Akufo-Addo’s nominee for the position of Municipal Chief Executive (MCE) by the Assembly Members.

The GNA observed that supporters of the Nominee attempted to seize cameras and other gadgets of the reporters when they protested about why they were not allowed to enter the meeting hall to observe and report about the proceedings.

Mr Tsatsu was held by the neck and his camera taken from him by one of the men identified as Mr Ubiadu Shaibu, who was described as the New Patriotic Party’s Deputy Constituency Youth Organiser, believed to be a supporter of the Nominee.

The Nominee also came out of the meeting hall and purportedly instructed the Police personnel from the Atebubu Police Station not to allow any media personnel to enter the hall, though they (Police personnel) were there to provide security for the safety of everyone.

Mr Kwasi Adu Gyan, the Bono East Regional Minister and officials, including some already confirmed MDCEs who accompanied him were already seated but the Journalists could not have access to inform him of their predicament.

I will prioritize safety of journalists – David Agbenu

Albert Dwumfour to set up insurance package for journalists